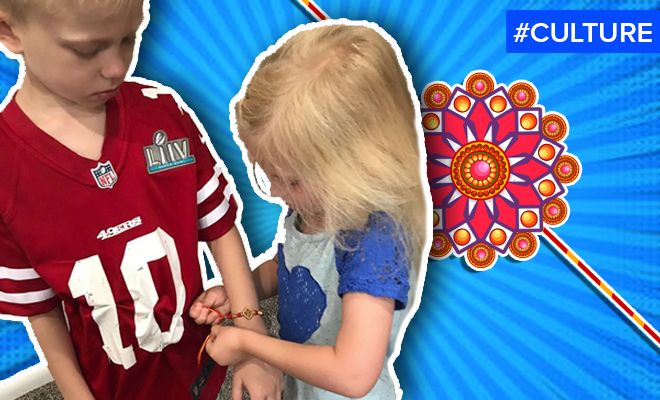 #Trending: 6-Year-Old Boy And His Little Sister Celebrated Raksha Bandhan After He Saved Her From A Frenzied Dog. This Is Adorable

Each time someone talks about their sibling rivalries or even how their sibling saved them from a sticky situation with their parents, I feel envious. Being an only child is not fun. Yes, being the only child and grandchild I get quite pampered but that gets old very fast. Anyway, even though I have no brothers and I am not particularly close to any of my cousins, well except maybe one, every year I eagerly look forward to Raksha Bandhan. It’s easily one of my favourite festivals simply because the meaning behind the tradition is so beautiful.

Anyway, this year a lot of people could not celebrate the festival; it is just another simple joy of life the coronavirus took from us. Although it didn’t stop one extremely adorable brother-sister duo from surprisingly celebrating Raksha Bandhan for the first time.

Before I tell you about them, let me give you a little context about them. I am sure you’ll have heard of Bridger Walker, the 6-year-old boy hailing from Wyoming, USA who saved his younger sister from a “charging dog” just last month. If you haven’t, now you know. According to reports, Bridger bravely grabbed his sister and ran from the spot but was seriously injured and received about 90 stitches on his face.

Bridger’s tale of bravery became the talk of the town. His selfless act of putting himself between an outraged dog and his little sister earned him praises and even the title of a superhero. Even Hollywood personalities such as Mark Ruffalo, Anne Hathaway, Chris Evans, and Robert Downey Jr showered him with praises.

Isn’t this exactly what the festival of rakhi is all about? A brother protecting his sister against all odds. This is why when Bridger’s aunt Nicole shared a post on Instagram of his little sister tying him a rakhi, we were overjoyed. I could “awwww” at the picture all day long, although that would be a bit odd. It really struck a chord.

Sharing the heartfelt post, Nicole talked about how Bridger and his sister’s story has resonated with people all over the world and that when her family learned about the festival of Raksha Bandhan, they knew they just had to celebrate it.

Also Read: This Woman Found Notes She And Her Brothers Hid In The Walls Of Their Home 30 Years Ago. This Is So Cute

The caption accompanying the post read, “Bridger’s story has resonated with people across the world and has traveled to places like Mexico, Brazil, Ireland, Iran, South Africa, Japan, and India—just to name a handful. Our new connections to these places have allowed us to cross boundaries, unifying us in the love that a brother can have for his sister. I know that my brother @robertwalker307 already made a similar post, but I would like to reiterate his thoughts: I recently learned about Raksha Bandhan. It’s a festival being celebrated today in India, Nepal, and regions of Pakistan. In the Hindi language, raksha means “to protect,” and bandhan means “bond.” During this festival, a sister ties a thread around her brother’s wrist as a symbol of their love and as a testament that the brother will protect his sister. I read that this action is also meant to protect the brother from bad influences. I love this sentiment of brothers and sisters caring for one another and find it very appropriate that we would get to celebrate Raksha Bandhan today. We invite all others who have a desire to do so to celebrate their sibling relationships today in a similar manner. Happy Raksha Bandhan! Thank you to everyone who taught me about this special day.”

The picture of the little girl tying a rakhi on her brother’s wrist is just more cuteness than I can take at one go. It’s so nice to see our traditions and festivals being followed in other countries and especially when the people celebrating them have such an inspiring story.

Bridger and his sister are really melting our hearts with their Raksha Bandhan picture. It’s just so adorable!

This Video Of A Daughter Playing Water Pranks On Her Daddy Is The Cutest. And Her Laugh Has Everyone Smiling