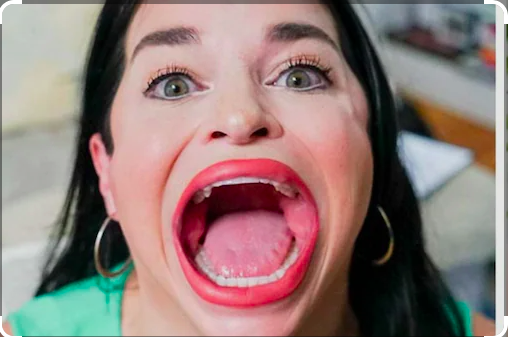 This Woman Just Set The World Record For Having The World’s Biggest Mouth. I Didn’t Even Know That Was A Record That Could Be Set

Normally, we are told that people with big mouths are the ones spreading rumours and spearheading all the gossip. We usually tend to stay away from such people. But who knew that if taken literally, a big mouth could land you a Guinness world record? That’s what happened with Samantha Ramsdell from the USA. She broke the world record for having the biggest mouth. It’s insane!

31-year-old Samantha was always insecure about her unusually large mouth as a child. She was mocked and bullied for it. But eventually, she grew to love her unique feature and recently found out that she has the biggest mouth in the world. Samantha came to this conclusion after starting a TikTok account where she showed off her large mouth. She soon went viral and netizens were blown away by the size of her mouth. We can clearly see why.

Eventually, her followers encouraged her to put herself forward for the Guinness World Record. So, Samantha went to a dentist to get her mouth measured in front of an adjudicator. As it turned out, her mouth measured a staggering 6.52 cm. Reportedly, she can eat an entire burger or a large portion of fries in one go. I’ll give you a moment to pick up your jaw from the floor.

Samantha told Guinness World Records, “Being 31 and being able to get a record for something that really I was so insecure about, something that I wanted to keep so small, it’s great because now it’s like one of the biggest, best things about me. If I had advice for anyone who had a large body part, or something really unique, and they wanted to go for the Guinness World Records title, I would say do it! Do it proud and make it your biggest asset. It’s your superpower, it is the thing that makes you special and different from everyone else walking around.”

Who would’ve thought a Guinness World Record could be set for having the biggest mouth!

Gujarat Girl Who Held The World Record For Having The Longest Hair, Finally Cuts It Off.