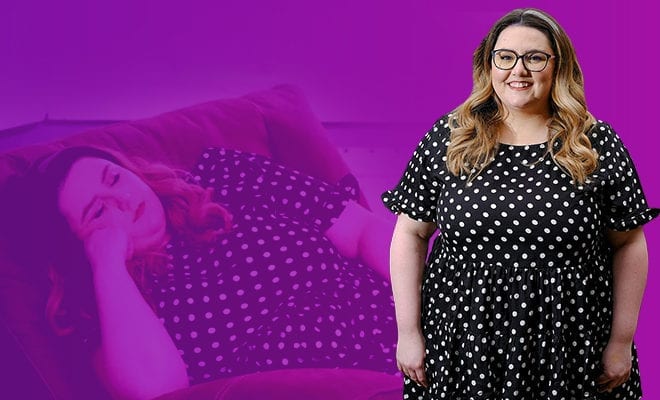 This Woman Falls Asleep Every time She Laughs Due To A Disorder!

About a month ago, I wrote about a woman who suffered from a rare and bizarre disease that caused her to collapse every time she made eye contact with anyone attractive. Can you imagine how unbelievably difficult that must be? I am not gifted with the skill of flirting but at least I can awkwardly smile through a conversation without collapsing. Anyway, after learning about this woman I started doing some research on the condition she suffers from, cataplexy. It’s a very, very interesting disease. But it’s extremely rare. However, today we have learned about another woman who also suffers from this brain disorder. In her case though, it’s not attractive people that make her collapse, it’s laughing. Yep, she falls asleep whenever she laughs. What do you think will happen to her if she ever watches FRIENDS?

24-year-old pharmacy dispenser Bella Kilmartin was diagnosed with narcolepsy, a chronic sleep disorder characterized by overwhelming daytime drowsiness and sudden attacks of sleep, when she was a teenager. She also has cataplexy, which causes sudden muscle weakness and is triggered by strong emotions. In Bella’s case, laughing is her kryptonite. She immediately falls asleep every time she laughs. This is beyond bizarre!

Bella’s rare condition has caused her to fall asleep in some very unusual places. Nightclubs, at work and even in a swimming pool. Yikes. I don’t think that is very safe. She told LADbible “It’s more when it’s something that I wasn’t expecting to be funny. It’s more than a little giggle – it’d be something sudden when I wasn’t expecting to be laughing. I lose control of all of my muscles and they go all weak, but only when I laugh. My knees go weak, my head droops, and I’m fully conscious and aware and able to hear everything that is going on but just can’t move my body at all.”

Bella Kilmartin, a 24-year-old #woman from #Nottingham, is suffering from a rare #neurological disorder due to which she suddenly falls #asleep whenever she #laughs.

Also Read: This Woman Collapses Any Time She Makes Eye Contact With Someone Attractive

After having symptoms for two years, Bella was finally diagnosed with narcolepsy. Initially, her drowsiness and constant tiredness were chalked up to stress. In 2015, she started seeing a specialist who diagnosed Bella with cataplexy. She said, “When the cataplexy initially started, the best way to describe it is I’d feel light-headed when I laughed. Then it progressed so that my eyes would flicker and my eyelids would go all droopy. As it has now progressed into full muscle weakness when I laugh, there have been so many incidents where I’ve hurt myself after losing control of my body.”

In one terrifying incident, while Bella was vacationing in Tenerife in 2016 she fell asleep in a pool. Fortunately, a friend of hers knew about her condition and swam over to her and held her head above the water so she doesn’t drown. Bella said that was the scariest attack she’d ever gotten.

I can’t even begin to fathom how difficult it must be to live without laughing. I can’t relate at all considering I end up cracking up in any and every situation. This is just so bizarre and ironically, a little funny!