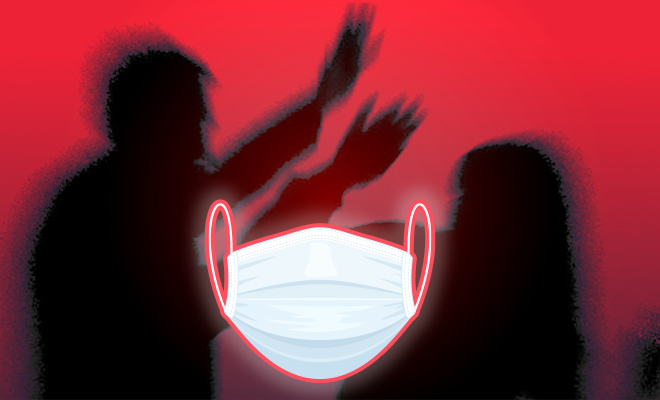 This Man Thrashed His Female Colleague After She Asked Him To Wear A Mask. Women Are Not Punching Bags

Men in our country seem to have such a problem with the existence of women. They want to treat women like objects they can use for their own gratification. These toxic men want women to nod and only speak in a tone that pleases their ego. They want to be able to do anything to our bodies, when and as they please. And that is everything that’s wrong with our world – it’s all because a huge chunk of the male population has their head in their penises. Sexual crimes, violence, acid attacks, mental torture – women have been bearing the brunt of their asshole-ry.

Statistics show that domestic violence has increased ever since the lockdown happened. But now, it seems like these men are spilling their aggression on to their workplace too. An employee of Andhra Pradesh’s state tourism department, C Bhaskar thrashed a female colleague when she asked him to wear a mask. This happened at AP Tourism Hotel at Dargamitta, Nellore and the accused has been arrested.

A CCTV footage of the incident has been used as evidence and the victim along with her other colleagues made a complaint against the accused. In the video, you can see the man pulling the woman by her hair and mercilessly beating her up. An old man tried to physically restrain him but he couldn’t and the man continued to beat her. Another woman in the video is seen walking out like it’s not her business. At some point, you see him hitting her with a stick and there was so much rage, he could have killed her if people hadn’t stopped him.

#WATCH An employee of a hotel in Nellore under Andhra Pradesh Tourism Department beat up a woman colleague on 27th June following a verbal spat. Case registered against the man under relevant sections. pic.twitter.com/6u9HjlXvOR

All this because the lady asked him to follow COVID-19 protocols. “Enraged at this, Bhaskar allegedly abused her, dragged her from her chair, caught hold of her hair and started beating her on her face and head with a stick pulled out from a wooden chair. He also insulted her in front of others,” sub-inspector of police K Venugopal said, as reported by Hindustan Times. Apparently, he had issues with the lady and was holding a grudge against her for reasons best known to him. But nothing gives him the right to assault her.

ALSO READ: This Man From Gujarat Brutally Thrashed His Wife After She Beat Him At Online Ludo. So Much Violence For A Game?

Thankfully, the accused has been arrested and hopefully next time he thinks of raising his hand on a woman, he remembers this. I can’t even imagine what hell he must be bringing at home if he can do this to a colleague. “We have arrested the accused, C Bhaskar, working as deputy manager at the AP Tourism Hotel and he has been sent in judicial remand. A case was booked against him under Section 354 (assaulting a woman intending to outrage her modesty), 355 (using force to dishonour a person) and 324 (causing injuries using a weapon),” the sub-inspector said.

ALSO READ: Kartik Aaryan Said His TikTok Video Wasn’t Misogynistic Because His Sister Was Okay With It. Ask A Domestic Violence Victim Instead