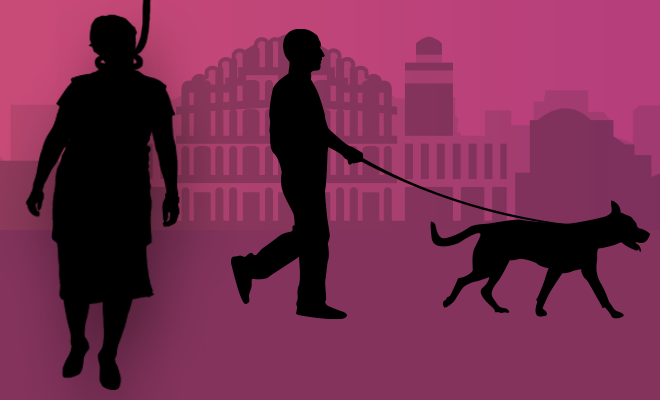 This Man Murdered His Neighbour And Hung Her Up To Make It Look Like A Suicide After She Objected To His Pet Dog.

When you do what I do, eventually the rose-coloured glasses come off and you begin seeing things for what they are. For instance, no matter how much society and the government wants us to believe in women’s safety, it’s becoming increasingly clear that it’s all merely on paper and in reality we have none. Women are being raped, beaten up and even murdered every day at the hands of pervy, entitled men who think no end of themselves. The most recent victim is a 55-year-old widowed woman who was murdered by her neighbour simply because she objected to his dog. This is psychotic.

This shocking incident occurred in Jaipur, Rajasthan. A 55-year-old woman, Vidya, was killed after she had a spat with her neighbours about their dog on Monday morning. She disliked the fact that they walked their dog right in front of her house. She was a government school teacher who lived alone after her husband passed away a few years ago.

The brutal crime came to light when people got suspicious as she did not operate her social media accounts on Monday morning. Staff from her school called her neighbours and they sent someone to check on her. That’s when her body was found hanging from a railing on her terrace.

Rajasthan: Woman killed by a neighbouring dog trainer in Jaipur making it look like robbery & murder by unknown

"Victim had argument with accused, who was on walk with dog earlier in morning. In fit of rage, he killed her. Accused has a history of robbery," say police. (11.01) pic.twitter.com/lKf4HWwtvZ

Also Read: A Man In UP Murdered His Girlfriend’s Other Boyfriend After Finding Them In A Compromising Position.

The neighbours informed the police who checked the CCTV footage and questioned the neighbours. They found that Vidya had gone to buy milk that morning following which she got into a spat with one of her neighbours regarding his dog. The police called the neighbours, two brothers, for interrogation.

One of them, Krishna Kumar, had scratches all over his face. However, he told the police that he got those while playing with his dog. After the police grilled him, he confessed to murdering Vidya with a sash and tying her up to make it look like a suicide. Krishna also told the police that when he broke into Vidya’s house, she recognized him and tried to defend herself. Hence the scratches on his face.

The police said, “Victim had an argument with the accused, who was on a walk with his dog earlier in the morning. In a fit of rage, he killed her. Accused has a history of robbery.”

Clearly, the Bible’s teachings of ‘Love Thy Neighbour’ does not apply here at all. It’s so brutal and horrifying that someone would murder a woman over a petty feud.

In An Act Of Cannibalism, Childless Couple Murders And Eats 6-Year-Old, Believing It Will Bless Them With A Child.