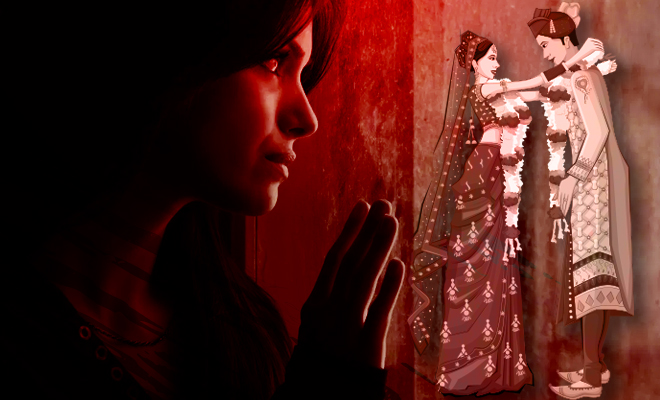 This Man Married Another Woman When His Wife Got Stuck At Her Parents’ Due To The Lockdown. This Is Sick, Women Are Not Disposable.

Most of the major problems in the lives of women all around the world are caused by men who can’t seem to take no for an answer. It’s as if they got shot with a bullet when they don’t get exactly what they want and then it’s all about vengeance. These men treat women as an unintelligent, feeling-less specie that was introduced on this planet so they can live like kings, getting served sex and seva on a platter. This is what marriage is to these men – the legal ownership of a woman that makes her his slave for life.

Even in this lockdown, when the world is fighting a tiresome and difficult battle against a potent disease, men stop at nothing to make things a lil shittier. According to a report by Times Now, Dhiraj Kumar from Patna, Bihar left his wife, Gudiya Devi, and married his girlfriend. Why? Because Devi had gone to visit her parents at Dulhin and couldn’t return home due to the lockdown. He demanded her to return asap. When she tried to reason with him that without public transport available, she wouldn’t be able to, he went ahead and married his girlfriend who lived close by and got her home.

Firstly, why does he have a girlfriend? And secondly, wow – look at how hurt his ego got when his wife didn’t obey his word. What are these tantrums? It’s sick that he is acting as he owns her in the first place and his demands are literally the most princess-y of all. Does he expect his wife to walk so many kms to cater to his whims and fancies? Clearly, he can’t seem to keep in his pants for long and desperately wanted someone to fuck.

ALSO READ: Kartik Aaryan’s New TikTok Video Shows Him Beating His Sister For Making Bad Rotis. Why Is He Tone-Deaf And When Did Domestic Violence And Misogyny Become Funny?

Devi filed an FIR against him and he got arrested for this shameful act. They even have a child together.  It’s sick, to say the least. A wife is not a shirt that you can just throw the old one out and get a new one.

ALSO READ: Woman Beaten Up By Her Husband When She Refused To Have Sex With Him. Lockdown or No Lockdown, This Has To Stop.