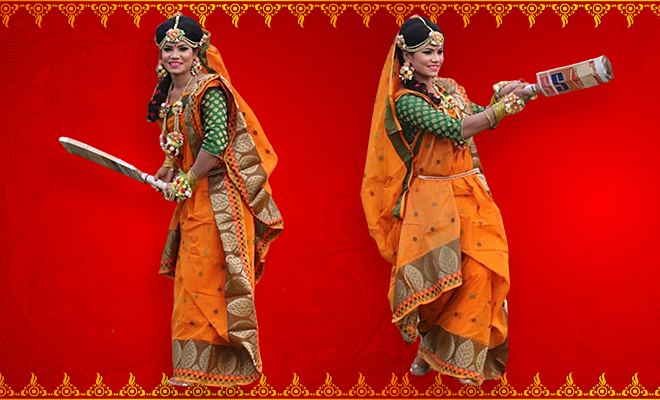 This Bangladeshi Women Cricketer Bride Pulls Off A Cricket-Themed Wedding Photoshoot In A Saree. She Has Everyone Bowled Over.

We have seen brides and grooms taking their wedding photoshoots very seriously. However, more often than not, they end up coming out pretty much the same. Your wedding photoshoot should tell a story—your story. It doesn’t necessarily have to be an account of how you and your hubby-to-be met but could incorporate things that brought you two together.

Here is one couple who came up with the most interesting and completely offbeat wedding photoshoot idea where a cricket ground made for the dramatic background and instead of flowers or flying dupatta, the bride wielded a bat. Why? Because the bride the and groom are professional cricket players.

Sanjida Islam who’s a Bangladesh women senior national team cricketer married Mim Mosaddeak, a first-class cricketer from Rangpural. The 24-year-old sportwoman chose cricket as the theme for their wedding photoshoot which some may call unconventional and strange, but we think it was pretty cool. In the pictures, she is playing shots all decked up in a traditional saree, jewellery and swinging her bat as she poses for the camera. Her pictures are going viral on social media and the wedding photoshoot is being applauded for serving as a testimony to the couple’s passion for the sport.

Sanjida is a right-handed batswoman who plays for Bangladesh national women’s cricket team. In the international career spanning eight years, she has played 16 ODIs and 54 T20Is till now. The young batswoman made her international debut against Ireland in T20I in 2012. She was also a part of Bangladesh’s squad that brought home Women’s Twenty20 Asia Cup and won the Women’s Asia Cup title for the first time in 2018. She has scored 174 runs in ODIs and 520 runs in T20Is. Now, her wedding photoshoot that echoes her passion for the game has become the talk of the town.

While most lauded the sportswoman for her quirky photoshoot idea and appreciated her zeal for the sport, there were some people probably born with a special talent of finding a way to get offended, who found fault in these pictures too. There are always some naysayers who completely overlook the emotions and take offense for some reason or other. Remember, the Kerala couple who had an intimate shoot in a tea garden and was bullied for promoting nudity? Ugh! In Sanjida’s case (who is fully clad in a traditional saree, BTW), some people lost their minds because they felt that it was inappropriate for her to play the game in an unconventional attire.

Also Read: This Couple Had A Destination Wedding In Disneyland Paris And It Was Every Bit Like A Fairytale

The nature of the photoshoot invited some criticism but Sanjida and husband Mim Mosaddek are completely unaffected by the unsolicited opinions and think it’s highly uncalled for. Mosaddek told The Daily Star, “Some pictures of Sanjida wearing a sari have gone viral.  Most people took it positively but some have taken it negatively. My response is, it is not a headache of mine and I don’t care about it.” Well, yes everything you do may not always sit well with the people but who cares, right? It’s your day, your wedding and your freakin’ photoshoot. And, a ground-breaking one, at that.

This is not the first time a cricketer has picked the gentleman’s game as theme for his wedding photoshoot, though. A few years back, Cricketer Krunal Panya and his wife Pankhuri Sharma’s pre-wedding photoshoot was also ‘pitch’ perfect where the couple posed with the cricket bat, batting gloves and stumps as props. However, Sanjida’s shoot totally takes the prize for actually playing a cover drive and pull shot on a real field, not to mention draped in a saree, which I can’t even walk properly in.

Also Read: This Couple Got Swept Off By A Wave During Their Wedding Photoshoot. Whoa, This Is Scary