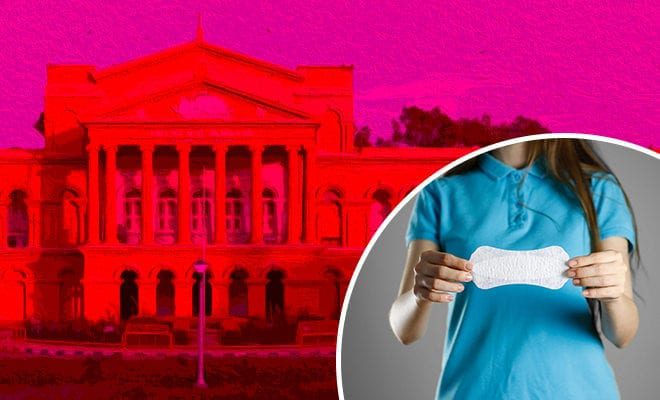 Let me ask you a question. Why is it that India doesn’t consider menstrual hygiene products as essential? Did you know that sanitary napkins are considered to be a luxury by more than half the women in our country? And because they can’t afford to buy pads every month, they resort to using cloth, sand and, in some extreme cases, manure. You don’t need me to tell you just how harmful that is for their health. Hundreds of school-going girls have to miss five days of school every month because they don’t have access to proper menstrual hygiene. I could go on and on but the bottom line is that period poverty is rampant and it’s largely because of the stigma that has surrounded menstruation since the beginning of time. But don’t worry. Today, for a change, I am not the bearer of bad news. On the contrary, actually. You see, the Karnataka HC has directed the state government to provide school girls with sanitary napkins and separate toilets. As shameful as it is that the state government needs to be told something like this, this is a landmark ruling.

The Karnataka HC has directed the state government to stick to its schedule of procuring sanitary napkins under the Shuchi Scheme for the fiscal year 2021-22. It cited the extreme shortage of menstrual hygiene products and said it should not prevent girls from attending school on menstruating days. We need all the states to pass such rulings and actively fight period poverty.

Justices BV Nagarathna and JM Khazi gave this ruling in response to a plea filed by the Anti-Corruption Council of India in 2018 requesting strict enforcement of the Shuchi Scheme. According to reports, the bench said, “The plan of action under SHUCHI SCHEME shall be implemented by the State for adolescent girls between the age group of 10-19 years, as the same is an aid to the empowerment of such adolescent girls particularly residing in rural and remote places, travelling from the villages to the Taluk headquarters or District headquarters for their education. They ought not to miss attendance in the school on certain days of the month on account of lack of effective hygiene products being available to them on certain days of the month.”

It further added, “In addition, if separate toilets are provided to girl students in Government and aided schools, it would be enhancing their health and privacy. As a result, it would ensure full attendance of the adolescent girls in the schools and their right to education would be fulfilled.”

Also Read: The Kerala HC Ruled That Women Can’t Be Denied Job Opportunities On The Basis Of The Nature Of Work

In response to this ruling, the Karnataka government said that by the end of MaKary 2021, a technical committee would be meeting. They will get administrative approval and then start the procurement process which will be completed in 90 days. Let’s hope that, unlike a lot of other state governments, they actually follow through.

Hold on, there’s more good news. The Additional Government Advocate told the bench that if schools are closed, community-based door-to-door outreach would be conducted by health workers to ensure that all adolescent girls are provided with sufficient menstrual hygiene products. Once the schools reopen, sanitary products will be distributed to them in the school itself. This initiative will better the lives of at least 17 lakh girls in the state of Karnataka.

A lot of schools around the country do supply their girl students with sanitary napkins. However, this pandemic has made it very difficult for these girls to gain access to hygienic menstrual products. This is why, the fact that in Karnataka menstruating girls will be supplied with sanitary products, even when schools are shut, is so amazing. This initiative should be expanded to cover the entire country.

Period poverty is a serious problem that needs to be tackled. All the state high courts need to follow in the footsteps of the Karnataka HC.