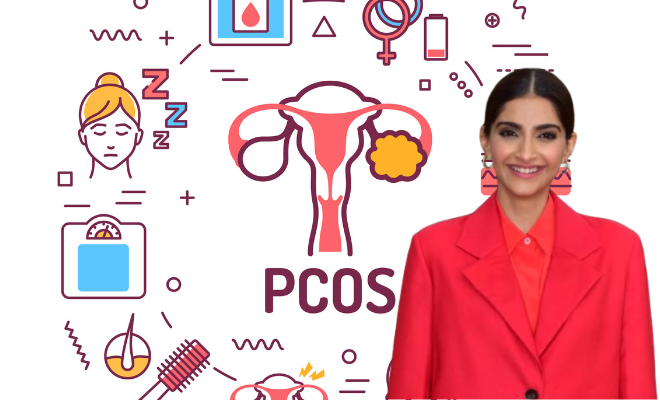 Sonam Kapoor Reveals She’s Struggling With PCOS, Shares Tips On How She Keeps The Symptoms In Check.

September is PCOS Awareness Month, dedicated to raising awareness about the most common endocrine disorder, Polycystic Ovarian Syndrome/Disorder (PCOS/PCOD) that affects 1 in every 5 women in India. Its symptoms include irregular, prolonged or no periods, weight gain, hair loss and skin problems like acne, facial hair growth and dark patches. Plus, it brings an increased risk of complications in conception and during pregnancy. So, you can guess how dealing with PCOS is no joke and it is a life-altering health condition for women. Now, Bollywood actor Sonam Kapoor has revealed on her Instagram that she suffers from PCOS.

Women usually develop PCOS in their childbearing age. However, in India, where even talking about menstruation openly raises eyebrows, expecting young girls to be aware about a condition like PCOS is futile. This is the reason why it goes undiagnosed and undetected in most women while they deal with it all their life. And that’s why a celebrity like Sonam talking about it openly makes one hell of a difference.

Sonam Kapoor recently opened up about her struggles with PCOS and we could hard relate. She took to her Instagram and talked about how she’s been dealing with the condition in a video titled ‘Storytime With Sonam – Chapter 1: PCOS’. She wrote, “Hi guys, going to share something personal here. I have been struggling with PCOS i.e. Polycystic Ovary Syndrome for quite some time now. PCOS, or PCOD, is a very common condition that a lot of women live with. It is also an extremely confusing condition since everyone’s cases, symptoms and struggles are different.”

In the video, which spans little more than 4 minutes, Sonam goes on to share some really valuable tips that have helped her cope with PCOS. She wrote, “I have finally figured out what helps me after years of trying several diets, workouts and routines, and I want to share my tips for managing PCOS with you! Having said that, PCOS manifests in different ways, and I urge you to visit a doctor before you self-medicate or self-prescribe.” Sonam’s video comes just in time for the PCOS Awareness month and if you are someone who’s dealing with PCOS, this is for you.

Hi guys, going to share something personal here. I've been struggling with PCOS (Polycystic Ovary Syndrome) for quite some time now. PCOS, or PCOD, is a very common condition that a lot of women live with. It’s also an extremely confusing condition since everyone’s cases, symptoms and struggles are different. I've finally figured out what helps me after years of trying several diets, workouts and routines, and I want to share my tips for managing PCOS with you! Having said that, PCOS manifests in different ways, and I urge you to visit a doctor before you self-medicate or self-prescribe. Do you have any other PCOS hacks and tips? Let me know what helps you in the comments! #PCOS#PCOD#StoryTimeWithSonam #LivingWithPCOS

Also Read: This Woman Has A Beard But She’s Not Shaving. What’s That Sound? It’s Her Smashing Beauty Stereotypes

Sonam Kapoor insists on the importance of exercise like walk and yoga. She says she makes it a point to walk 10,000 steps every day and it has really helped her. Another fab tip she shares is to practice breathing exercise and meditation. It’s no news that PCOS seriously affects mental health and can cause extreme stress which further disrupts your menstrual cycle. She recommends using an app for meditating and breathing exercises in case you can’t find a yoga teacher. Lastly, she advises to cut back on refined sugar from your diet. She says, “I have given up sugar completely.” She adds, “I cannot tell you how my life has changed since I’ve given it up. And I am not only talking about refined sugars but also natural sugars like honey, maple syrup, gud etc. Just stop having it. You can get good sugars out of fruits.”

The Neerja actress revealed that these lifestyle changes have really helped her, “I have been suffering from it for several years, since I was like 14 or 15 and it has been the bane of my existence. I have gone to several doctors and dieticians to help myself and right now, I am in a good place.”

She ends the post by asking her followers for any other PCOS hacks and tips that they might have, and Instagram obliged. The comment section was a goldmine of helpful hacks and tips from women who have struggled with it and made changes that helped them manage the symptoms. A user commented, “I have been struggling too with pcos.. but I finally have it under control… going gluten free and dairy free along with regular exercise and yoga has helped ALOT..! Also, i have completely eradicated sugar from my diet.. it’s actually easy to do this… i feel great, so energetic.”

Another user wrote, “Yes @sonamkapoor – giving up sugar and gluten changed my life! Also avoiding dairy and processed foods along with organic fruits/veggies. High intensity work outs and low intensity workouts also depend on the phase of your cycle.” A user also pointed out how keeping one’s stress levels in check could be tough but really helpful to beat PCOS. She said, “I too was diagnosed with PCOS recently. I’ve completely eliminated dairy, sugar processed food and gluten. Only organic food and now thinking about reducing meat intake. Manage stress (easier said than done!) workout regularly, do pranayam.”

Known as one of the most common symptoms of infertility, Polycystic Ovarian Syndrome (PCOS) affects 20% of Indian women. The best remedy is losing weight through consistent exercising and following a junk-free protein-rich diet. You got this, girl! #September #PCOSAwareness #RT pic.twitter.com/qB44OZFkCs

Before Sonam Kapoor, other celebrities like Shruti Hassan and Divyanka Tripathi have also opened about their struggles with PCOS. It not only affects your mental health and physical health, but also hinders your daily productivity and can shatter your self-confidence to pieces. It really messes up your hormones and insulin levels but the symptoms can be handled with the right diet and exercise. It does require some patience, resistance and work, but you could totally keep those pesky symptoms in check and lead a healthy and happy life. So, girls, relax and follow these helpful tips from Sonam and her Insta fam.

Also Read: Shruti Haasan Talks About Periods, PMS, PCOS And Why We Get Sanitary Napkins Wrapped In Black Bags. Period Shaming Is Real