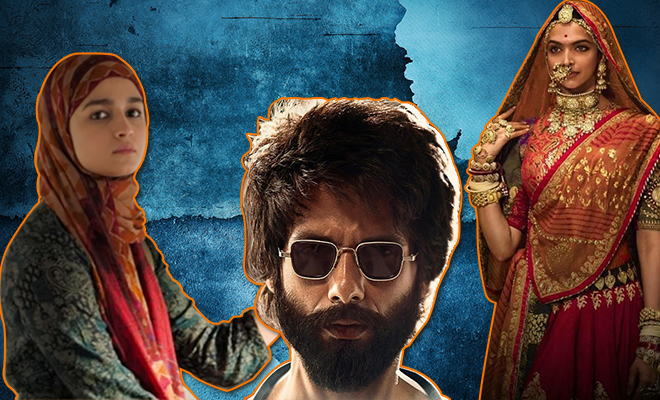 Safeena Was Wrong. Padmavaat Had Issues. That Doesn’t Make Kabir Singh Less Sexist Or Justify It In Any Way!

As a 23-year-old, you’d think I would be only plagued by my, well, 23-year-old problems. Nope, I am a writer with an opinion and in the India of today, that means that I will be, willingly and unwillingly, exposed to a lot of trashy mindsets. I have seen it, and experienced it but it still baffles me- the blind loyalty that the public has for actors and actresses. The loyalty is far from #goals, and for me, it’s mostly flummoxing.. Like the time when Sallu bhai’s fan base decided to roll out death threats to Sona Mohapatra for calling him out on his toxic masculinity. Or at this point where I am getting abusive DMs because I wrote a piece about how Kabir Singh is misogynistic tripe.

Kabir Singh dropped on the box office recently and the audience loved it. The box office numbers are now rolling in,  and worryingly enough, it has entered the Top 20 list for the biggest opening weekends. We have been quite vocal about our disdain but the comments section in our articles is where the mind-numbing conversations are happening. Meme pages are talking about how Kabir Singh is being singled out (boohoo) and that we “woke” feminists didn’t have a problem with female characters that movies have shown. Oh we did.

Look, Kabir Singh is a three-hour-long showcase of the character’s anger and his violent ways. Short of killing people, this guy will do anything. The morals are missing, justice is to be carried out by him alone and women will stand in the sidelines and play along with, basically, whatever.  And that is where the problem lies. The movie romanticises a dangerous character like Kabir Singh who’s actions in the movie remain unjustified. Literally all we are offered is that this guy is dealing with pain. Oh, that makes everything okay then.

And when we say we don’t approve of it, we in no way mean that it is encouraged when women do it. The fight or dissent is not gender based here. Be it Safeena’s character in Gully Boy when she busted Kalki’s head with an empty bottle or be it Deepika performing jauhar in Padmaavat, none of these characters have our support.

When Alia’s character Safeena showed her violent streak, for Albina first and then later Kalki, she wasn’t made a hero for it. She was broken up with by Ranveer Singh and also heard an earful from him for how it was in all ways WRONG. As far as Padmaavat was concerned, while there might have not been a declaration in the movie dismissing jauhar, but there was a lot of flak that it received for promoting an action as extreme that. We had a problem with it. We did then, we do now. Women are not sacrificial lambs who hold the honour of men in their vagina. That’s rubbish.

On the other hand, Kabir Singh opens with a scene where Shahid Kapoor is holding a knife to a woman, threatening her and asking her to take off her clothes, as the audience cheers him on. The audience roars again when Kiara, for the first and last time stands up to Shahid for being disrespectful to her father.  In turn, she gets called ‘sirf Kabir Singh ki bandi’ and gets slapped. And of course, ultimately he ends up with the girl and that is fucked up on so many levels.

What Safeena did was wrong. jauhar was wrong. But Kabir Singh is also wrong.

People, actors and most of all the directors making such movies need to understand that having access to such a huge audience, with a voice and a populace that comes with various mindsets comes with some strings attached and those strings are of responsibility. The fact that so many people out there would actually think that this behaviour is justified, and end up getting influenced, is something the filmmakers can’t turn a blind eye to. Also, this is exactly the kind of content that sets a country like India back by decades undermining all the efforts being put into for transitioning to a state of gender equality. Because once again, at a time when the country stands the most vulnerable and impressionable, this is the kind of content we chose to make popular.

Yes, the ultimate choice of actions lies solely on an individual, but must we promote such toxicity in the name of entertainment, when we know the kind of influence films and celebrities hold in shaping people’s minds?