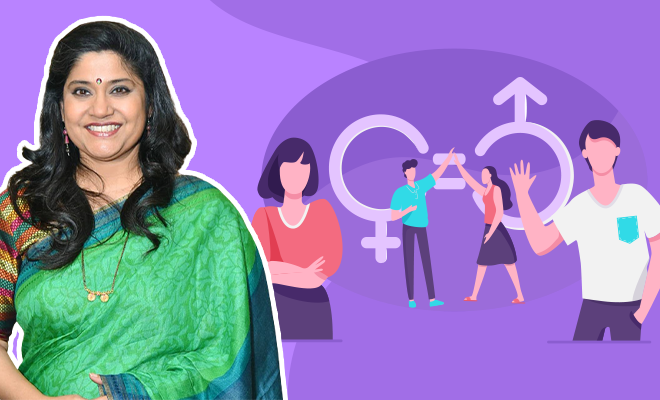 Renuka Shahane Says Teach Men How To Behave. We Women Have Been Saying That All Along

Renuka Shahane is best remembered for her her role in Hum Aapke Hain Koun. And from that movie, her dramatic fall from the stairs, a situation that aptly describes this year for us, has been making the rounds, so she’s definitely trending even now. And besides being meme fodder, Renuka Shahane is also dropping truth bombs and we stan her.

Renuka Shahane was having a casual chat about how supports support women entrepreneurs and went to on to talk about how we expect women to do more than simply asking the men to behave. Which is true isn’t it. Recently, this ad about a jewellery brand was trending and no, we are not talking about the Tanishq ad. In this a girl who was being harassed pulls off some pretty cool moves and scares her harasser away. And again, we’ve put the onus of keeping safe on the woman. And it’s annoying because we are done with that. The men should learn to keep their hands to themselves, their brains clear of filth and their penises in their pants.

And that’s exactly what Renuka Shahane is saying. She said, ““We need to change the mindset of people. Unfortunately, that doesn’t come across, despite strict laws. Men also need to be empowered. They need to be equal to women. Social norms allow men a lot of leeway for basic things; they are not expected to follow certain rules. It is ok if they don’t, but a woman has to work double, struggle, learn self-defense. Ask the men to behave – isn’t that the easier way to go about it.” It certainly is, we say.

She also mentions the role of cinema is changing these mindsets. She said, “A lot of films are also doing by equalising the way girls and women are raised. There are films where parents don’t look at girl child and boy child any differently. We do need to share those stories and we need more sensitive boys. We need to equate being a good man or a strong man with being sensitive. Sensitivity is not a virtue of a woman, but a man as well. It is not a sign of weakness at all. Violence is not being strong; violence is being the biggest bully. What’s valuable about being a bully?”

We’ve been saying this for a long time- a man isn’t lesser for being sensitive- and woman doesn’t have to be masculine to be counted. And we’re glad someone like Renuka Shahane agrees.