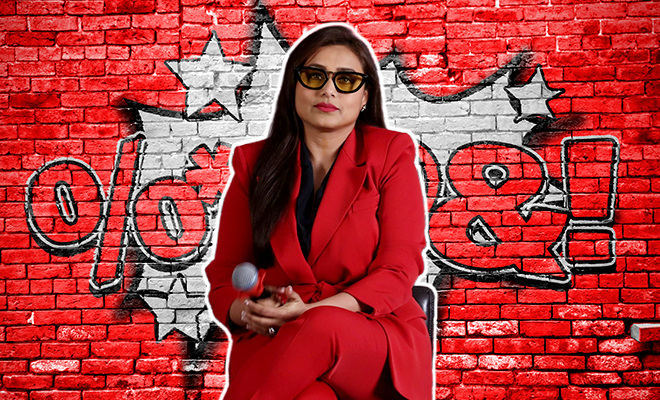 Like I have said many times before, I come from a very liberal background. My parents were never authoritarian, they always let me do anything but made sure I knew my limits. By that logic, when I got old enough to understand what all the cuss words mean, my parents did not mind me using the occasional F word as long as I didn’t go around screaming it on the road. I know I have super cool parents.

Thanks to all the amazing friends I made in college, cuss words became a very normal figure of speech for me. They are the perfect way to express any emotion- anger (duh!) happiness, excitement even sadness. Anyone who has ever used a cuss word probably will agree with me. Am I right? Yeah, I can see a few of you nodding your heads to this statement.

Much to my surprise, this twisted logic of mine wasn’t that far-fetched. I realized that when I heard Rani Mukerji say that just like her parents, she too cusses a lot.  She even said that is a form of expression that adds to a person’s beauty. I know it sounds ridiculous, but I think this logic of hers makes a lot of sense.

Also Read: Rani Mukerji Opens Up About Being Voice-Shamed Early On In Her Career. Seriously, Bollywood?

Recently, Rani was a guest on Neha Dhupia’s radio show No Filter Neha and true to the name, she had absolutely no filters and we loved that about her. While talking about how she and her parents cuss during a normal conversation she said, “When you use cuss words, somewhere in your heart, you are releasing that angst from inside your body and you start looking really beautiful.”

Another reason I love her for saying this is because without realizing this, she is busting one of the biggest gender-stereotypes. “Women shouldn’t abuse” is something I am sure we have all heard at least once in our lives. And you know what I do when someone says that to me? Bless them with my middle finger. When Rani said she does she cracked the stereotypes right open. I have always wondered, why it is okay for men to do it but when we say something like “fuck off” we get dirty looks. So, thank you, Rani, for busting this idiotic stereotype.

She goes on to talk about how the ‘stars’ of today seem “spoiled” because they have an entire entourage dictating their every move. She said “Today’s stars are bit too spoilt because there are too many people surrounding a star today. Our moms would do all of that single-handedly.” She further adds, “Today you are less prone to making mistakes as there are so many people around who tell you what to do and not do.”

I don’t know how true that is since I don’t know how the film industry actually works. Yes, there are a few restrictions for sure, but are they really told what to say and not to say? Guess we will never know but all I can say is that I am really enjoying her carefree, ‘say it like it is’ attitude. You go, girl!

On the work front, Rani is currently basking in the success of her latest movie Mardaani 2.

Rani Mukerji Said Mardaani 2 Will Show That Men Shouldn’t Cross Some Lines. Because Limits Are Not Just For Women, Right?