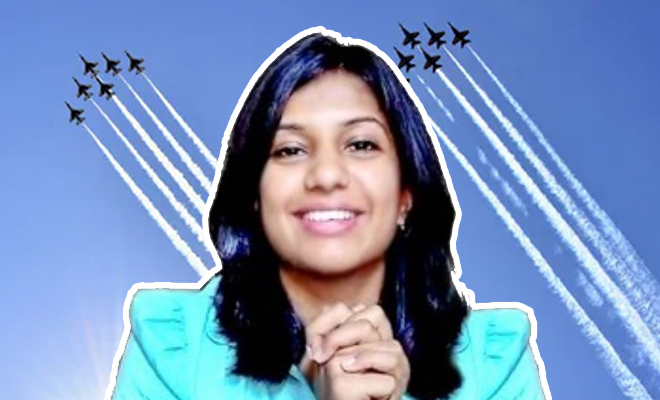 In my experience, the best way to start your day and keep your spirits up throughout the day is to get some positive news in the morning. Amidst all the health scares, natural disasters and disconcerting crimes, a small piece of good news can go a long way. And what is better than discussing a woman who has broken all barriers and is currently making history?

As we all know that joining our armed forces is no child’s play. But we have also established that it is doubly difficult for a woman to climb the ladder and reach a position that has been held solely by men for so long. However, the woman we are talking about today is on the path of changing that.

You see, the cadets at the Air Force Academy are selected for the flying branch are divided into three stages. Punya has completed Stage 1 which is training at the Academy in Dundigal. Now she is moving onto Stage 2, where the cadets are further divided into fighter, transport and helicopter streams. Punya is the only woman cadet who has been selected for the fighter stream.

The reason this makes us so happy is that our defence forces are not known for their inclusivity and equality. Even though Punya will go through the exact same training as her 39 batchmates, she will have to fight longer and harder to thrive as a fighter pilot, because, well, that’s how the cookie crumbles.

If she completes her training, she would be only the second woman from State to do so.

Her mother, Anuradha Nanjappa spoke to Bangalore Mirror. She said, “It’s going to be very tough. Hopefully, she will be able to overcome them and become commissioned as an officer in the next passing out parade in December.” She further added, “Punya has always wanted to join this stream and her dream has been realised. In fact, she was the only girl who had opted for it and has worked very hard to get selected.”

Punya completed her engineering from the National Institute of Engineering. Her mother said that she has longed to join the Air Force since she was in the 9th grade.

When Punya completes her training and gets commissioned into the Air Force as a fighter pilot, she will be only the second woman from Karnataka.

While that fact that Punya is the only woman cadet in her class speaks volumes about capabilities and ambitions but it also proves just how much our Air Force lacks inclusivity. This isn’t the first instance of women being in the minority. When Gunjan Saxena took to the skies, she and another woman were the only women during the Kargil war on fighter jets. In fact, despite such a heroic feat, Gunjan Saxena had to retire because women weren’t given permanent commission till then.

Nevertheless, Punya is a great inspiration to us all.