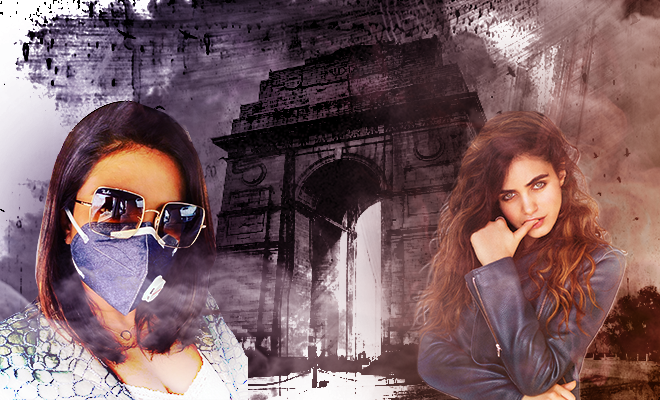 No! The Headlines Are Not Exaggerating. I Live In Delhi And The Air Is Truly Bad, Everyone Is Falling Sick And Every Breath Is Troublesome

It was the day right after Diwali, I had just woken up and was still a little hungover from the previous night that entailed a lot of chatter over drinks, playing cards and inadvertently losing a lot of money while at it. Still twisting and tossing in bed, I wish I didn’t have to get up. I wanted to stay in bed. I would realise less than 30 seconds later that I should have saved up a wish because I am going to need it. A wish that I could breathe clean air. No, I am not being dramatic. The headlines are not exaggerating. Once I stepped out, I suddenly found myself in what seemed like a very relatable yet a slightly toned down version of Stranger Things’ Upside Down world.

‘What is this sorcery?’, I thought at first. The skies were scarily dark, filled with smog at 11 am in the morning and I couldn’t really see. And it’s not like this hasn’t happened before but this was a strange kind of zero visibility, hitting us way before the winters have come around. Now, being born and raised in Delhi, among the many many things that one gets used to, including how ridiculously unsafe it is for women and how even parking in a wrong lane can be a fatal, and after a point breathing in the city’s pollution comes to all of us naturally. But this wasn’t pollution in front of me, it was an airpocalypse.

The view from my balcony Is no view at all. I have a persistent head ache. This is sick. #DelhiPollution #DelhiSmog pic.twitter.com/YQxZcRusD1

Diwali, formerly known as the festival of lights has now earned the infamous sobriquet at the festival of blight. It’s a week since Diwali, the city is submerged under smog, and we can blame the farmers in Punjab and anything else, but surely the crackers that were lit up in celebration have something to do with it. The skies are threatening to become a permanent shade of earl grey, and every whiff of air feels like you’re smoking a harsh cigarette, this pollution and cough is perhaps what is going to be the end of us all. And I am not overstating it. And I wish I was, but the fact that most of the people I come across on the daily all look like Bane from Batman with their face masks is pretty telling.

Us not being the only ones to state the obvious (while we can), Bollywood celebrities too have been taking notice of the alarming rates of air pollution, especially with the increasing rate at which people are falling sick. The Sky Is Pink star Priyanka Chopra, being one of those few to talk about how the sky is anything but pink. Posting a selfie in a mask herself, she wrote, “Shoot days for #thewhitetiger. It’s so hard to shoot here right now that I can’t even imagine what it must be like to live here under these conditions. We r blessed with air purifiers and masks. Pray for the homeless. Be safe everyone. #airpollution #delhipollution #weneedsolutions #righttobreathe.”

Just landed in Delhi,the air here is just unbreathable.Absolutely disgusting what has become of this city.The pollution is visible, dense smog. People arein masks. How much more disaster does one need to wake up and do the right thing? Tell ourselves we are wrong. #DelhiBachao

Arjun Rampal too spoke on the issue as he wrote a tweet about the alarming and deteriorating quality of air in the capital city. He wrote, “Just landed in Delhi, the air here is just unbreathable. Absolutely disgusting what has become of this city. The pollution is visible, dense smog. People wearing masks. How much more disaster does one need to wake up and do the right thing? Tell ourselves we are wrong.  #DelhiBachao.”

Start your day with music. Below is the link to a scintillating thematic composition "Swagatam" by Veena exponent Emani Sankara Sastry.https://t.co/9e4mtx6I64

With schools being shut to keep the children from falling sick, to a lot of people deciding against stepping out of their house, it is safe to say that every breath right now is some bits of oxygen but mostly exhaust fumes, burnt crackers and burnt ashes. And while the rest of us latch on to air purifiers and masks like it is the last piece of cake left, Environment, Forest and Climate Change minister Prakash Javadekar has some serious recommendations on what songs to start our day with. Because that’s the need of the hour, innit?

I’d call it a modern day take on Nazi’s gas chambers if I didn’t know any better. But hey, at least the phuljhari selfie was LIT and got you several likes…and some people got asthama, but who cares right? *coughs uncontrollably*