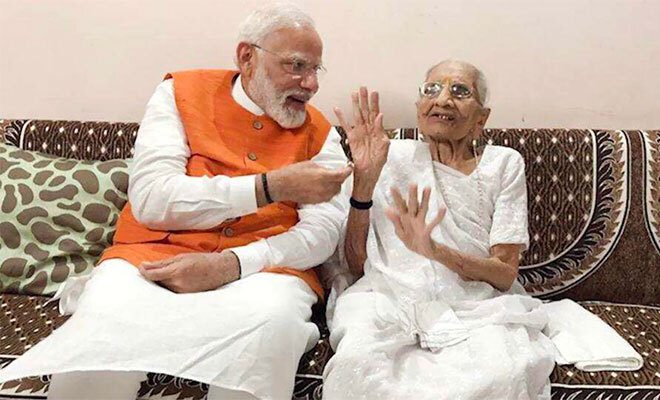 I feel like it is a universal feeling to want to do something great for your parents. We all want to be able to honour all the sacrifices they have made in making sure we have a good life. And the Prime Minister of our country is no different and has found a way to do just that for his mother on her birthday. A Gandhinagar road has been named after PM Narendra Modi’s mother, Hiraba. She will turn 100 on June 18 this year. The road will be named in order to keep her name alive and to teach future generations about service.

Hitesh Makwana who is the mayor of Gandhinagar Mayor stated in an official release that as PM Narendra Modi’s mother Hiraba turns 100 years old this year, it has been agreed to name the 80-meter route from Raysan Petrol pump “Pujya Hiraba Marg” in her honour. This decision has been made taking into consideration the demand and feelings of the people of the state capital.

The statement went on to say that the decision to rename the 80-meter road was made to preserve Hiraba’s name alive forever and to teach future generations the values of sacrifice, atonement, service, conscientiousness and service.

Also Read: Pakistani Student Thanks Narendra Modi And Indian Embassy For Rescuing Her From War-Struck Ukraine

Hiraba resides in Raysan village, on the outskirts of Gandhinagar, with the PM’s younger brother, Pankaj Modi. The neighbourhood is administered by the BJP-controlled Gandhinagar Municipal Corporation. Pankaj Modi revealed that his mother, Hiraba was born on June 18, 1923.  He added that she will be celebrating her 100th birthday on June 18, 2022.

Prime Minister Modi will be in Gujarat on June 18 and is expected to meet his mother on her birthday, according to sources. PM Modi recently paid a visit to his mother in March. On June 18, Modi will travel to Gujarat for a day, visiting the Pavagadh shrine and then speaking at a rally in Vadodara. On that day, the Modi family organised a bhandaro (community meal) at the Jagannath temple in Ahmedabad. Additionally, the Hatkeshwar Mahadev Temple in Vadnagar has arranged for different religious programmes for the prime minister’s mother’s long life and health.

Rangoli Chandel Requests PM Modi To Not Stop The People Who Want To Die. Her Insensitivity Is Unnecessary.