Mother-In-Law Ruins Bride’s Big Day By Announcing Her Own Pregnancy News Before The Couple Could Announce Theirs! 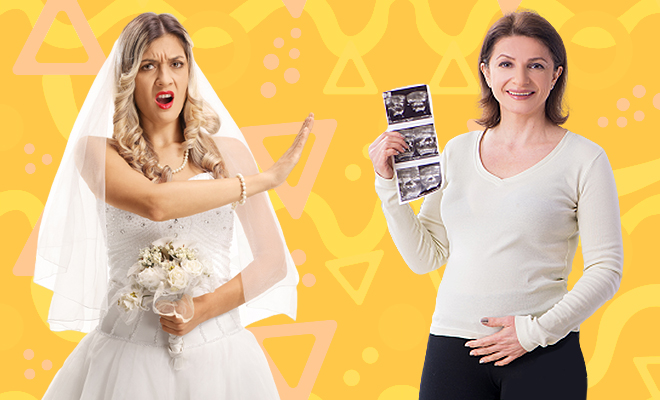 There are a few days in my life where the spotlight has to be on me and that is non-negotiable. Days like my birthday, my promotion days and my wedding day. It’s about me. Like Monica Geller from F.R.I.E.N.D.S who doesn’t like her thunder being stolen on her special day, there are many of us want our big day to be about us. As did one bride on Reddit, who lost her calm after her mother-in-law stole a big moment from her big day, by announcing her own pregnancy before the happy couple could announce theirs.

Almost as if a scene from a comedy drama, the news about a bride being upset with her mother-in-law for stealing her thunder on her wedding has been making rounds on Reddit. Turns out, the MIL ruined her big day by making a big speech and using the gathering of family and friends to announce her own pregnancy.

And what made it worse was that the newly wed couple had planned to do exactly that when they were to give their toast, except the groom’s mom beat them to it. The angry bride took to Reddit, to take everyone through it as she wrote, “Our wedding reception was quite intimate, but we had the traditional speeches planned: father of the bride, best man (husband’s brother), groom. It was only the day before that my mother-in-law asked if she could have the mic to say a few words when we sat down to eat, and we said that would be great, but that she would need to go before my husband.”

She went on to share, “Stupidly we figured she would talk about us at our wedding so we never asked what she planned to say. Big mistake. She announced that she’s expecting a baby. She’s still pretty young and very healthy but it was a huge shock that just completely took over all night.”

She then said, “What’s even worse for me is that I am also pregnant and we planned to announce it at the wedding, but I told my husband to just leave it out of his speech. Everything felt a bit sour for me after that, so.” And we can imagine why.

She added, “After the wedding, I didn’t speak to my mother-in-law for a few days and I got a call from her sister (a guest) to ask what was up. I explained that I felt like the attention was taken away from us without our permission (I would have said no, but still) and it was so unfair to spring that on us.” Continuing her angry rant, the bride then wrote, “Apparently, I ruined my own wedding because I was obviously p***ed off about the good news and that I was being ‘totally selfish’. Maybe I was, but it was my wedding day that was already ruined by a pandemic!”

The netizens on the other hand stood divided on whether or not the bride’s anger and resentment was justified. One user wrote, “You NEVER make a personal announcement at a wedding without the couple’s knowledge and permission,” while another one with a differing point of view said, “Is she having a baby shower? Cause that sounds like a flawless time to announce that you were going to share the big news at your wedding but since family events could always use some extra happiness, she’s not the only one who’s pregnant!”

What do you think? Over-reaction or did the MIL had it coming?