Twitter Bids Adieu To Indian Skipper Mithali Raj As She Retires From International Cricket, Call It “End Of An Era” 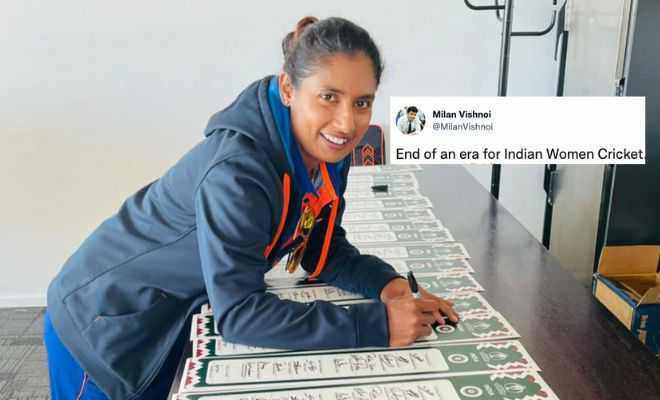 I’m sure that all of you cricket fans have already heard the bad news. Today is a dark day in the history of women’s cricket in India as the captain of the Indian Women’s Cricket Team, Mithali Raj has officially announced her retirement from all forms of international cricket. Taking to Twitter, the cricketer thanked everyone for their love and support while announcing her retirement and sharing that she is looking forward to her ‘2nd innings’ with blessings and support from everyone. The Indian skipper’s announcement has left the country in shock and people across the country are taking to Twitter to share their opinions.

Thank you for all you’ve done @M_Raj03 … you are truly a national treasure 🙌🏼 #ThankYouMithali https://t.co/jw8V5xQK9h 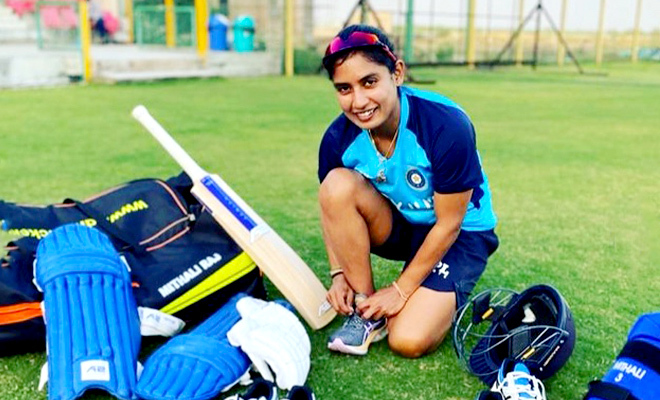 This is sone pe suhaga!

Enjoy your retirement, the nation will not forget your contributions ever. It's forever etched in history now

@M_Raj03 You have made India proud on international stage and inspired a generation to take up cricket. Take a bow and all the very best for your future endeavours.

You served the nation 🇮🇳 with Distinction Mithali.
Name of Mithali Raj is immortal in Indian cricket. You ll be remembered fondly by many generations.
End of an Era in Indian Cricket 🏏
Go well Champ and best wishes for the future 🇮🇳🇮🇳💐💐✊🏼✊🏼

Your contribution to the Indian Cricket has been phenomenal. Congratulations for an amazing career. Thank you so much for giving us so many moments of proud, joy, cheer.. will always miss you and remember you as one of the greatest legends of Cricket pic.twitter.com/wyYiPQuOzp

What a role model she created for the girls of this country 🇮🇳 Amazing sportsperson 🏏 #Cricket #India https://t.co/PJEGGL5RIz

Her numbers and stats aside, which in itself are staggering, @M_Raj03 will go down in history as one of the most influential Indians of her generation & of this millennium #MithaliRaj https://t.co/8CPIwS9w6d

It used to be a treat always to watch you play.

Best wishes for the new journey ahead. You have bought immense glory to the Indian Women Cricket Team.

Thank you #Mithali for your contribution to Indian cricket and how rapidly women's cricket in Bharat is progressing now!😊 You have inspired the next generation and were always a treat to watch and a dependable player whenever out there. Wishing you the best! @M_Raj03#MithaliRaj https://t.co/EwOwycJlQb

People took the opportunity to thank Mithali Raj for her contributions to the Indian Cricket scenario and for being the perfect role model to the young generation of women. Several users called her a legend and said that it was Mithali who revamped women’s cricket in India.

We are very sorry to not cheers for you like we did with Men's Cricket. I don't think it's only fans fault but Management didn't do many things for spreading of Women's Cricket. 🙏
But still we are fortunate that we have watched your batting. You are the #Legend #ThankYouMithali https://t.co/XfU28sfdKl

Also Read: Mithali Raj Announces Retirement From International Cricket. We Will Miss Her On The Field!

Some users took a moment to apologise to the Indian skipper for the country not cheering for her and the women’s team the way they did for the men’s cricket team in India.

Every journey has an end..

It was a delight to the eyes to see you play on the ground @M_Raj03. You are an amazing cricketer and a wonderful being. You work to promote women's cricket and represent India is second to none.

We are proud of your journey. Best wishes ❤️🇮🇳 https://t.co/ZzO3b6d4at

Its so difficult to let U go @M_Raj03 have inspired millions of young girls to Dare to Dream n make that Dream a reality
Women’s Cricket will be a lesser place without you !
My bestest wishes for ur 2nd Innings
You will shine like a Star wherever U go
Whatever U do#Mithaliraj https://t.co/wBNmJVycdI

Had a great career. Time to make way for younger generation. Right move and good luck to your future Mithali https://t.co/rMidZOO1i5

Several Twitter users thanked her for her work and congratulated her on her future endeavours.

Thank you Legend for taking women's cricket to new unseen heights! 🐐❤
All the best for your second innings! 👍 https://t.co/xGLgWQBZsL

"#MithaliRaj" The name I used to remember and relate to Women's Cricket while growing up. Thank you for your service. @M_Raj03 https://t.co/bBDvSVzZns

An end of an era in women's cricket, an absolute GOAT!!! You are an inspiration to many around the 🌍, keep inspiring.. Happy Retirement Mithali Raj 🙌#Legend #BCCI #MithaliRaj https://t.co/oLLAVw5qjb

The Goddess of Women's Cricket said good by to cricket 💔
As a fan we miss you in Women In Blue
The Best Women Cricketer of India Forever ❤️❤️
Miss you mam
Wishing you Good luck in you Second innings and keep inspiring us❤️#MithaliRaj#GodessOfWomensCricket https://t.co/9RYESmZ8eO

I still remember the school day of my 6th Standard. On behalf of #Women's Day, My teacher told us to choose one woman character, read the journey, and give a speech. I thought of choosing something unique. Before that, I hadn't any knowledge about Women's Cricket. @M_Raj03
(1/3) https://t.co/afDwQ1RxcS

It's hard to hear that the #LadyGodOfWomenCricket my didi is retiring but I wish you to see you as a Head Coach of Indian Women Cricket Team and all the very best for your 2nd innings Miss You & ❤️ U Didi @M_Raj03 https://t.co/LHIsv6liW9

The only woman cricketer we knew in our childhood when women's cricket was not at all known to all.

Netizens also called her the goddess of cricket and the face of women’s cricket in India.

In her long retirement announcement note, Mithali Raj shared that she started her journey of representing India in women’s cricket at a very young age and she has been at it for 23 years now. Call these years the “most fulfilling, challenging and most enjoyable years” of her life, the Indian skipper announced that she is retiring from all form of International cricket. She further thanked the BCCI for all their support and expressed her gratitude for the opportunity to lead the team for so many years. Take a look at her statement.

Thank you for all your love & support over the years!
I look forward to my 2nd innings with your blessing and support. pic.twitter.com/OkPUICcU4u

Well, Mithali Raj’s contribution to the growth of the Indian women’s cricket team will never be forgotten and we’re all going to miss her dearly. Here’s to wishing her the best in her future endeavours.