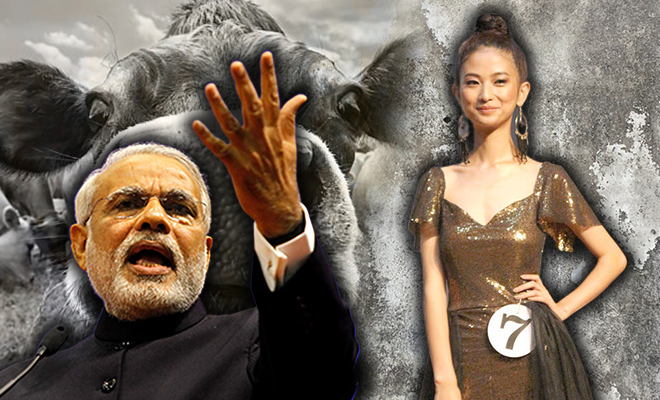 The thing about our country is that even after decades of independence we still haven’t learned how to separate religion from politics. Every political move ever made has a religious aspect to it. Do you know what the best part about this is though? No one will speak up in public, everyone will whisper amongst their own crowds and have strong opinions but not one single person is willing to come forward and tell the government, this is where we are going wrong. Some democracy, huh? Though, that was the case until two days ago when an 18-year-old Miss Kohima participant called out PM Modi in her question answer Round and we are in love with her courage.

Vikuonuo Sachu, a political science student from Nagaland participated in the Miss Kohima pageant which is held annually in Nagaland. During the Q&A round of the pageant she was asked a very tricky question but her answer surpassed everyone’s expectations. She was asked by one of the judges, “If Prime Minister of our country Modiji invites you to chat with him, what would you say?” After thinking for about 10 seconds she replied saying, “If I were invited to have a chat with the Prime Minister of India, I would tell him to focus more on women instead of cows.” This answer left everyone in the audience and even the host in splits. We are ROFLing too! At the same time, we are also wondering how such a young girl can have such courage.

Though she did not win the pageant (bummer!) her answer went viral within hours earning her more fame and recognition than she would’ve gotten if she stood first. After her video went viral, netizens started flooding Twitter with memes and praises for Sachu. While some said she rocks, others were surprised at her candid reply, but all in all everyone was super amazed by her. Just like we are!

Right in the face Modiji pic.twitter.com/RVjj4IIlx6

The reason why her answer is so relevant is because, ever since BJP came into power in 2014, they have been fumbling with the beef ban in the Northeastern states. They can’t actually execute there since beef is an important part of their diet and the locals will not take it well. But what Sachu said is true on multiple levels. The BJP government should be spending more time making this country safer for women rather than cows. A point we all agree with.

Whatever Your Politics, You’ve To Agree The Death Of Sushma Swaraj Is A Great Loss To Us. The Nation Is In Mourning(Opens in a new browser tab)