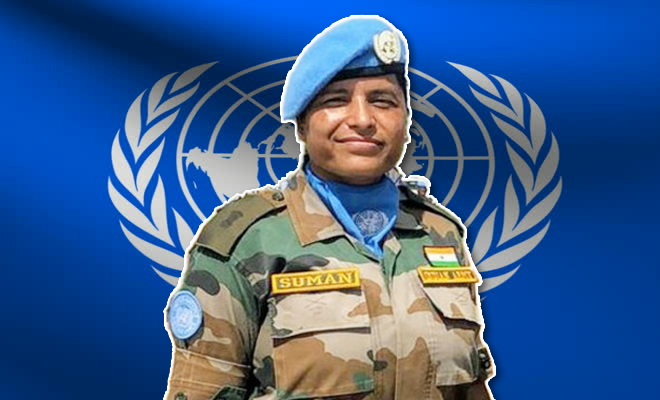 Major Suman Gawani Is The First Indian Woman Peacekeeper To Be Awarded The United Nations Military Gender Advocate of the Year. This Is Amazing

There used to be a time, and probably still is, when a woman could not be seen stepping beyond the threshold of her house to pursue anything other than her homely duties. There was a time, when education was a far-fetched dream for any girl. In fact, there was even a time when these notions were changing but they simply didn’t evolve enough so that pay parity could be a thing. But, now perhaps is not that time. After decades and centuries spent in standing up against the gender oppression that women have been subjected to, we finally have womankind breaking free and reaching for the skies, and rightly so.

We say this after coming across yet another woman who has filled our hearts with pride and minds with the hope of just how powerful a woman can be, after she has put India on the map once again. An Indian Army officer and woman peacekeeper, Major Suman Gawani, who had been serving with the UN Mission in South Sudan (UNMISS), recently hit the news after she was shortlisted to be acknowledged and credited for her  impeccable contribution as a ‘powerful role model’.

Major Suman Gawani of Indian Army, formerly deployed with UN Mission in South Sudan (#UNMISS) will receive the 2019 UN Military Gender Advocate of the Year Award during an online ceremony presided over by Secretary General António Guterres on 29 May – Int’l Day of UN Peacekeepers pic.twitter.com/7AEPNc4hkl

Also Read : This Muslim Woman’s Plea To Allow Women To Enter Mosques Has Gone To The Supreme Court. This Will Start An Important Dialogue

This will be the first ever UN Military Gender Advocate award being presented to an Indian peacekeeper. With this Suman has not only put the country on the map, that otherwise makes it there for dubious honours but also ensured that women have role models like her to look up to.

UN Secretary-General Guterres also commended the two women as he said, “These peacekeepers are powerful role models. Through their work, they have brought new perspectives and have helped build trust and confidence among the communities we serve.” He further also said, “Through their commitment and innovative approaches, they embrace a standard of excellence that is an inspiration to all blue helmets everywhere. As we confront today’s challenges, their work has never been more important or relevant.”

Speaking about how she is feeling to be honoured with the title, Major Suman Gawani shared, “Whatever our function, position or rank, it is our duty as peacekeepers to integrate an all-genders perspective into our daily work and own it in our interactions with colleagues as well as with communities.” And that she did.

About the award, NDTV said, ‘Created in 2016, the award recognises the dedication and effort of an individual military peacekeeper in promoting the principles of UN Security Resolution 1325 which is on women, peace and security in a peace operation as nominated by Heads and Force Commanders of peace operations.’

Suman has mentored over 230 UN Military Observers (UNMO) in conflict-related sexual violence and taking charge to ensure the presence of women military observers in each of the mission’s team sites, she has always lead by example. She was posted in South Sudan during this time. And we are glad to have an Indian woman making a difference.