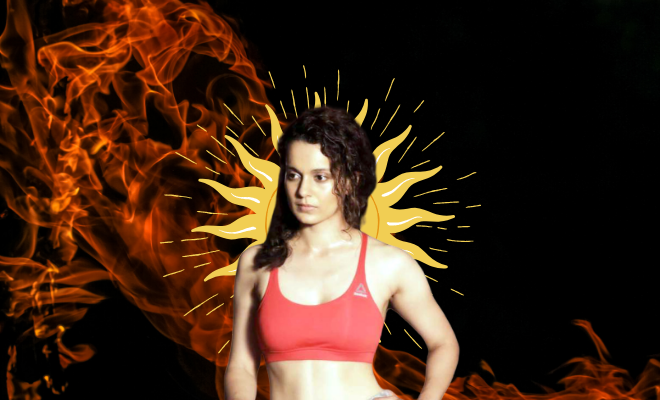 Kangana Ranaut Sets A Challenge For Herself Decides To Lose 20 Kilos In 2 Months. She’s Inspiring Us To Get Off Our Butt!

As someone who has just started working out literally a week ago (including two cheat days, because why not), I sometimes feel that I need a solid brushing up on the concept of working out and when to start expecting results. And at this point, if there is anyone that might be able to serve as the perfect mid-week motivation, it is Manikarnika actress Kangana Ranaut, who is turning up with unbelievable workout goals by deciding to lose 20 kgs in just 2 months!

The difference between Kangana Ranaut here and me is that while I struggle to lose even 5 kilos in 2 months, she’s set the target of losing a massive 20 kilos. The actress who gained about 20 kilos for her role in the movie Thalaivi where she will be seen donning the role of the iconic Jayalalithaa, is now all set and driven to shed that extra weight for her upcoming films – Dhaakad and Tejas. The video that shows her having a conversation with her trainer, also shows her weighing herself on a scale, that  shows her weight at 70.3 Kgs, while she tells us how her original weight used to be 52 kilos.

All set to get back into shape, her current instagram post (an account run by her team) is captioned, “Issa transformation goal. Kangana Ranaut has 2 months in hand and 20 tough kilos to lose for her fierce character in Dhaakad! Here’s to her ambitious, goal-oriented, and perfectionist spirit.” And if anyone can do it, it is her, especially with that attitude!

On the professional front, she was recently seen in the film Panga that showed her in the role of a dedicated housewife and a mother and a kabaddi player, while her next film Thalaivi is set to release on 26th June this year. Meanwhile, we are excited to follow up Kangana on her weight loss journey and see how it goes!

Also Read : Richa Chadha And Kangana’s Politics May Be Vastly Different But On Sets They Were Professionals. Like It Should Be