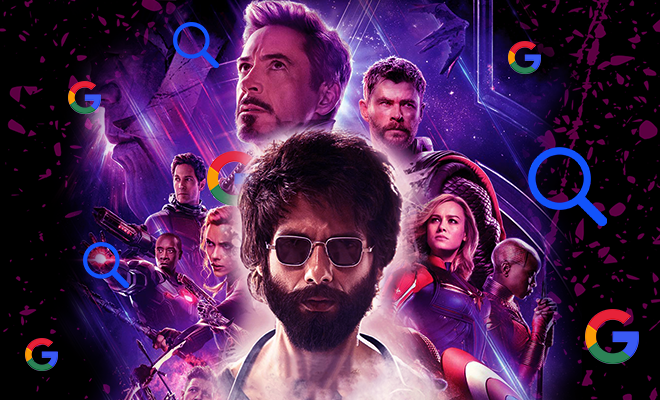 Kabir Singh Becomes The Most Searched Film Of 2019. We Are A Nation That Loves Its Toxic Masculinity.

2019 was kind of a challenging and confusing year – not so much for Bollywood as it was for us – the audience. From giving us a mixed bunch of movies this year, some spoke of social constructs and addressed the problems with it, while others added to the saturated misogyny and even aggravated it for no good reason. Kabir Singh, belonging to the latter category, not only bandied about happily the ideas of abuse in a relationship but also convinced a largely stupid part of the population that this was acceptable in a relationship. And no matter the kind of controversies it stirred, (some that we were responsible for creating), it has still managed to become the most searched film of 2019.

Shahid Kapoor’s film that single-handedly furthered some of the most nonsensical and idiotic gender biases in a relationship, by promoting dominance, violence and utter crap in the name of love, has ultimately managed to outlive the controversies and backlash it received, to end up becoming the most searched film of 2019 on the Google India list. Which by no stretch of imagination is good news. It was followed by the marvel movie Avengers : Endgame, which was also one of the top grossing movies on the box office. Collecting a total of 450 crores , Kabir Singh broke all records on the box office and honestly, all of our hopes too, as the response for it had proved just how much we as a population enjoy watching a man break all the rules and treat women like shit.

The entire fiasco with the release of this movie was that it promoted a psychotic kind of a love, or let me rephrase psychotic kind of an obsession of the male protagonist. The entire run time is dedicated to the male lead justifying his behaviour of an abusive asshole by saying how much he loves his girl. In fact, the director of the film, Sandeep Reddy, too went on record to dig his own grave as he endorsed physical violence in a relationship and said , “When you are deeply in love and deeply connected with a woman, and vice versa, there’s a lot of honesty in it. If you don’t have that physical demonstration… you don’t have the liberty of slapping each other, then I don’t see anything there.”

Safe to say, he was met with a lot of criticism, but at the end of the day, if Kabir Singh has anyhow managed to become the most searched film, then congratulations to us, we have failed ourselves and successfully pushed the country back in its mindset about the treatment of women. And despite several people holding exactly that against the movie, nothing could stop it from trending nation wide and promoting a culture and lifestyle of abuse.

And we get it, the best defense the actors and directors of this movie had to make was that it was a piece of fiction anyway and should be taken as just that, but thing is, we can’t ignore the fact that such movies play a larger role in shaping the mindset of people, especially the ones who don’t know any better. So, when the antagonist/protagonist of the movie, endorses a lifestyle of drugs, alcohol consumption, using violence and intimidation as part of his relationships and still gets the girl in the end, we ar handing the youth a textbook to refer to. From witnessing audiences clapping at scenes where Shahid Kapoor intimidates and hurls absuses at women to now making this movie the most searched film, the movie continues to disappoint us and shake our faith in humanity.

If a man is deeply connected with you – He will NEVER LAY HIS HANDS ON YOU.

He will NEVER slap you.

He will NEVER TOUCH YOU without your consent.

Women (and young boys) have been told for aeons that being beaten up is a sign of *Love* / *Discipline*.

Further down the list of the most searched films were names like Joker, Captain Marvel and Super 30 and on the sixth position was Akshay Kumar’s Mission Mangal. Ranveer Singh and Alia Bhatt’s Oscar entry film, Gully Boy went on to take the seventh place, followed by Housefull 4 at number 9 and Uri :The surgical strike at number 10.

Also Read : Parvathy Thiruvothu Clearly Explains The Problem With Movies Like Kabir Singh And We Love Her For It