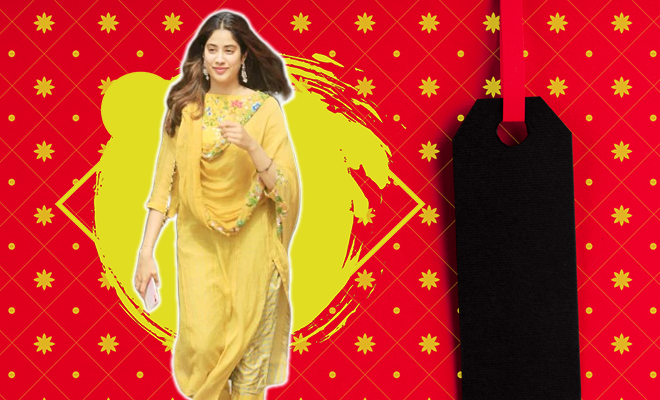 Janhvi Kapoor Gets Trolled For Not Taking The Price Tag Off Of Her Dupatta. This Could Happen To Anyone, Guys!

Out of the million millennial subcultures that have come about in the last couple of years, including some very questionable ones, by far the most misunderstood one is the call-out culture on social media. What started as a way to call out people for their armchair activism and accountability, using social naming as a way of making them realise their mistake, has quickly turned into a mud-slinging, nasty way of flagging people down for mistakes, no matter how intentional or honest. As has been with the Dhadak actress, Janhvi Kapoor, who inspired a series of comments and trolls over what was a truly honest mistake of not taking the price tag off of her dupatta.

Leaving from her Pilates class yesterday, dressed in a gorgeous yellow yellow suit with a dupatta, Janhvi did not see this coming (excuse the pun), when she was called out for not having removed the price tag from her dupatta. Something that has probably happened with all of us at one point in time or more, has now become the reason for Janhvi Kapoor to be getting targeted by absolutely pointless trolls, pointing out how the actress couldn’t even remember to take the tag off. And honestly, we don’t understand the need to make a mountain out of a mole hill.

Also Read : Janhvi Kapoor Brings Home A Brand New Maybach. But Here’s Why This Was Heart-Warming

If I were to recall the number of times I’ve walked out of my place not realising to take the price-tag off, it would be a very, very long list. And that’s what, in all of those times, the most that has happened was a friendly whisper by the person next door to tuck it in, without them flashing it like a front page news on all the social media platforms. Of course the fact that I am not a big celebrity (yet) might have played a role in it, but why must they be treated any different? Be it an honest mistake or an unfortunate wardrobe malfunction, celebrities just don’t get any leeway.

This won’t be the first time also that Janhvi has found herself at the brunt of pointless and harsh trolling over nothing. Another time, the actress was brutally trolled for holding a book at a book launch, upside down. Once again, could happen to anyone guys. So maybe it’s time to save our breath and tweets for something actually worth talking about, because this clearly doesn’t cut the bill. Can we just cut the woman some slack already?

On the work front, Janhvi is currently shooting for The Kargil Girl, which is Gunjan Saxena’s biopic by Dharma Productions as well as Dostana 2, both of which are slated to release next year.

Also Read : Janhvi Kapoor Gets Trolled For Holding A Book Upside Down At A Book Launch. She Is Only Human, Cut Her Some Slack Guys!