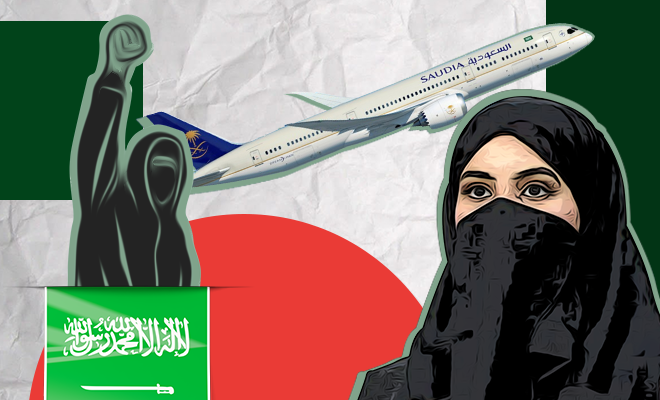 It’s So Basic But Let’s Celebrate That Saudi Women Will Be Allowed To Travel Without The Permission Of A Male Guardian!

My mother has always managed to find very different yet effective ways to teach me humility or to make me grateful about the kind of life I get to live. Reminding me not to waste food, to not forget the value of money for there are so many who survive happily on much less, and to always show appreciation to be living in a democracy like India, which among a lot of bad things, is still better off than countries like Saudi Arabia, where the situation of women is far worse. Of course things are changing now, and we are glad.

Saudi Arabia, announced on Friday that it will be lifting off the ‘guardianship’ system that put restrictions on women to travelling alone without a male guardian present. A change that has happened after a long struggle by campaigners and activists who raised their voice about the kingdom’s oppression on women. It is no news that Saudi Arabia is one the top countries in the list of nations with highest gender disparity, but ever since Crown Prince Mohammed bin Salman has ascended the throne, promising change has been noticed.

Also Read : A Woman Lost Custody Of Her Child To Her Saudi Husband Because Her Bikini Photos Were Presented As Evidence

Saudi women, above the age of 21, now do not have to seek the permission of a male guardian to obtain passports, travel or to work.  A milestone for  country where the women are still treated as second class citizens and one that runs as per the Sharia laws. It may be basic and seem like something every human being should be allowed agency over, but this is Saudi we are talking about and it is a giant leap. An example was set in 2018 as well, when the Kingdom lifted its prohibition on women drivers. It is believed, that such change has been ushered after many women have fled the country to get away from the abuse or oppression they suffer due to the strict and unforgiving laws.

The new regulations that have been announced give any adult Saudi, regardless of their sex, the ability to obtain a passport, travel, register births, marriages and divorces, and represent themselves as the legal guardian of minors. It was also declared that “work is the right of the citizen,” and that the employers could not longer discriminate against employees based on their sex, age or physical disability.

While for us, it may seem absolutely unbelievable to imagine that the women had earlier been deprived of rights that seem so basic, for Saudi women this is a big victory and we are here for them! Hopefully with the new Crown Prince and his vision to move towards a global culture, Saudi women would be able to come at par with the men in good time.

Sameera Reddy Opened Up About Her Breastfeeding Struggles And It’s Honest AF.

Battle Of The Bohos: Sonakshi Sinha And Parineeti Chopra Wear The Same Outfit But, We Have A Fave!

Also Read : Finally, Saudi Women Are In The Driver’s Seat!