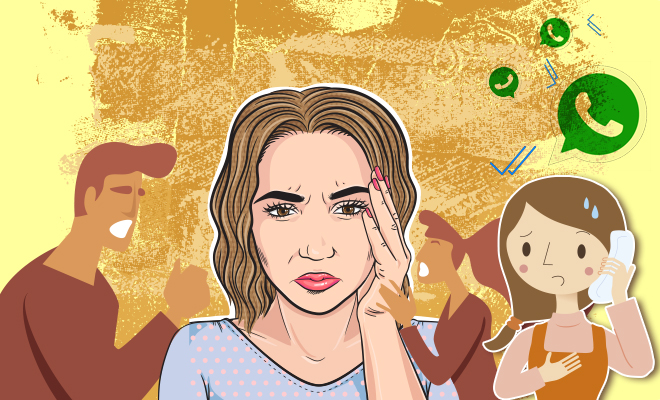 It Can’t Be Only My Parents. They Believe Every WhatsApp Forward And Even Send It To Other Groups. Oh Man!

This lockdown has been hard on all of us. While I have kept myself busy with work, Netflix and social media, my parents have obsessions of their own. Before coronavirus hit India so bad, my mother said that she got a “message” that India would not be affected. I should probably mention that she got that message from my aunt who got it from her friend. I had a horribly tough time trying to explain to her that there is no certainty in a situation like this but her only defense was “But, I got a message”. That is when I knew that my parents would believe just about anything as long as it comes through WhatsApp.

Do you know how through this lockdown people are doing various challenges on Instagram? I think my parents are participating in a challenge to see how far fake news can spread and how much shit people believe. Read on to know my various issues with parents and their WhatsApp forwards addiction (I don’t know what else to call it).

For Them, WhatsApp Forwards Are A Reliable Source Of News

Okay, I don’t know what it is with all parents but if I get one more WhatsApp forward with the secret cure for corona, I am going to kill myself. This is a true story, my mother posts one new bullshit forward on our family group ever day. Those forwards are all “say god’s name three times and bathe with wheat atta and you won’t get corona”. Put me in an oven and I will probably be a cake but my mom will buy it.

The best part is that parents actually live by that crap. Like for example (I am not making this up, though I wish I was), the other day my mother got a WhatsApp forward from a friend of hers that said that AC’s can cause coronavirus. She made me sleep, practically drowning in my own sweat for like three days. Ugh, I am so sick of these forwards and all the rumours parents are unknowingly spreading.

Also Read: Dear Parents, It’s Work From Home, Not Summer Vacation. Why Don’t My Parents Get The Concept?

They Will Believe Anything They See Online

I must’ve told my parents like a hundred times to not believe everything they read online, but do they listen? Nope. Every day they come up with some absurd piece of news that has no head or tail and they not only believe that but go around giving other people fake news with so much confidence that it scares me. For example, my aunt got a message saying that mid-April, an asteroid was going to come crashing down on earth. She sent that message to every group she had. The funny part was that people in those groups believed it too. And if they feel like you aren’t believing it, it’s like they start selling the fact that it’s true. It scares me because these are the same people that taught us not to believe a stranger when he says he has candy.

Why would anyone be interested in a video of a woman talking about how Sai Baba came into her dream and told her the cure to corona? Yeah, I got that video three times in one day and once from my own father. You know, every time I lie to my parents about where I am going or who I am going with, they catch on in seconds. But the minute they get some bizarre video that defies logic, it doesn’t take them two seconds to buy into it. Huh, maybe next time I should make a video. It’s worth a shot.

Also Read: I Never Thought I Would Say This But I Actually Miss Going To Work. Here Are 7 Things You Will Relate To If You Just Can’t Wait To Go Back

Have you tried talking to your parents about technology? After the fifth time of explaining that you don’t need to search for Google on the Google homepage, you kind of want to break your head. I get it, they weren’t brought up with a lot of technology around. But trying to explain to them that WhatsApp forwards is 80% fake is impossible. I mean, an asteroid can actually hit earth before they understand how them forwarding those messages leads to fake news.

By Now, They Have Become Experts In Conspiracy Theories

I was having dinner with my fam the other day and my father begins talking about how coronavirus is a coverup for some US secret operation. Now, I know better than to argue with him because that leads to well, more arguments so I just silently ate my food and nodded along. I swear to god I have feeling one day he is going to come and tell me it was aliens that spread corona to take over the earth. Hey, that is a super cool movie plot.

Look, I am a sucker for good conspiracy theories okay? Not because I believe in them but only because I like knowing there is more about a situation than meets the eye. But some of these WhatsApp videos and forwards that I have read make me want to hunt the person responsible and congratulate him on his creativity. I shit you not, my father sent me this coronavirus conspiracy theory blog post and the blog’s name was “UFO spotlight”. Yep, I am really worried about the kind of things middle-aged adults are into these days.