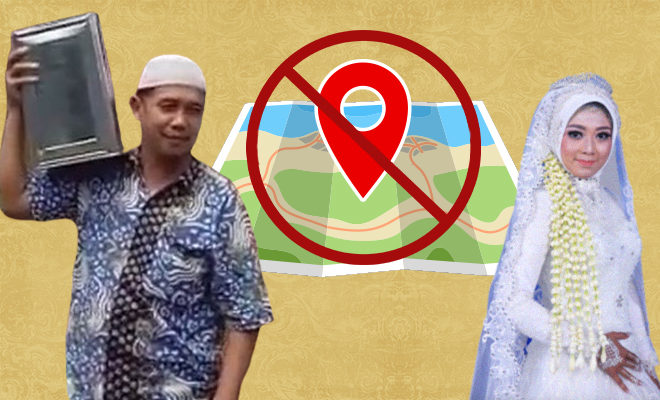 With everything available at the click, from getting food and groceries delivered to our doorstep in the middle of the night, to finding the answer to most complex equations with just a simple search on Google, technology has made life a lot easier. Except for this one person, who thanks to using Google Maps, almost ended up marrying the wrong woman.

You see, as much as Google Maps have made travel effortless, considering it can navigate ways through small lanes and take us to destinations we wouldn’t have easily reached, they have also been quite a pain in the ass. I say this after once having been landed plum in the middle of a beach with the tyres of my car sunk deep into the sand, while I was navigating the way to a cafe that was on the beach side. But even that doesn’t hold a candle to what happened with this man from Indonesia, who was directed to a wrong wedding by Google Map.

Suffering a great deal of embarrassment, this groom from Indonesia who was on his way to the bride’s house to get married landed in a different house in the same village, according to Tribunnews.

Also Read : This Hilarious Video Of A Woman Struggling To Parallel Park Has Gone Viral

The mix-up happened on Sunday and as funny as it sounds, the bride also didn’t notice until very late that the man she was marrying was in fact not the one she wanted to marry. Turns out, the bride Ulfa was so busy in getting ready for her wedding that she and her family went on to even exchange gifts with the family of the wrong groom without realising anything.

However, the groom quickly realised that it was an engagement function and not a wedding and it dawned on him where he had messed up. After sharing that they might be at the wrong residence, they apologised to the bride’s family and were politely directed towards the correct address.

Who would’ve guessed that a wedding for two people would be made memorable for reasons relating to Google Maps! We’re glad the bride and groom ultimately married the right people, for it seems like true love always finds it way. And not through Google Maps!