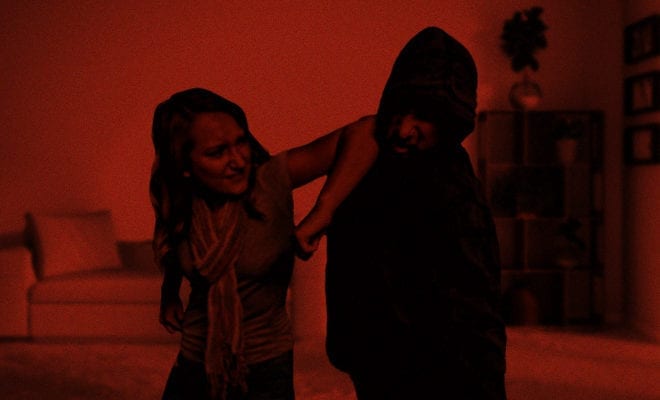 In Mumbai, This Woman Single-Handedly Defended Herself Against Two Thieves Who Broke Into Her House

Until our government doesn’t decide to tackle the surging rate of crimes against women, we just have to accept that we aren’t completely safe anywhere. Not even in our homes. The most we can do is learn self-defence and maybe try and understand Ross’s concept of Unagi (the technique, not the sushi). I was in the fifth grade when my parents first enrolled me in Karate classes. Although I quit after a few years, the lessons I learned give me the courage to walk on an empty street, even today. It’s extremely vital for every woman to know how to defend herself. Just like this woman from Mumbai did when two men broke into her house at night.

35-year-old Dr Sheetal Alhat, a trichologist by profession, was living with her friend in Nallasopara (West), Mumbai. On Sunday, at around 4 am, while she slept soundly in the living room of their fourth floor flat, two thieves broke in and attempted to rob the house. One of the men pulled a knife on Dr Sheetal while the other grabbed whatever he could find. That’s when she fought back and managed to free herself.

Mumbai: Woman doctor single-handedly takes on thieves as they attempt to rob her in her flat.https://t.co/mu1gJfZXb7

Also Read: This 15-Year-Old Girl From Jalandhar Fought Off Two Men Who Attempted To Snatch Her Phone. She’s An Inspiration

At that moment, it’s very easy to freeze. But Dr Sheetal single-handedly fought her way out and managed to escape without being hurt. It’s something every woman needs to learn and have the courage to do. Talking about the incident, reports quoted her saying, “I would sleep in the living room as my friend’s bedroom was full of her belongings. At around 4.30 am on Sunday, the two thieves entered the flat and Shaikh covered my mouth, held a knife and threatened to kill me. But I fought back, bit his hand and freed myself. The other thief opened the main door, and both ran away with my mobile phone and a purse containing Rs 5,000 and other documents.”

After the thieves fled, Dr Sheetal alerted her neighbours and informed the Mumbai police. One of the accused, Shaikh, who lives on the first floor of the same building, has been arrested while his accomplice is still absconding. Mumbai may be relatively safer than all the other cities in our country but it’s not perfectly safe. We can all learn a little something from Dr Sheetal. More power to her!

#Trending : A Mother Fought Off Two Kidnappers To Save Her Daughter From Getting Kidnapped. She’s So Brave