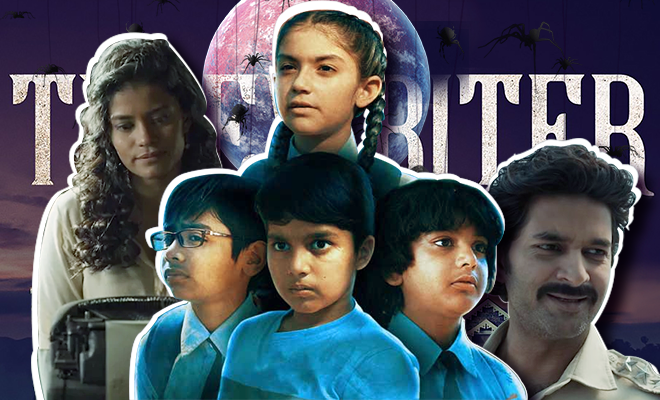 So I am a horror movie enthusiast, and I will watch anything even remotely supernatural. Even if it’s supposed to be a flop show/movie, I will definitely give it a shot. Now that doesn’t mean that I am very brave – maybe during the day, but only a little. But once the clock strikes 12, count me out of the brave community. Which is why, when my cousins suggested binge-watching Netflix’s latest horror series Typewriter on our sleepover, I was looking for an escape route. The trailer looked eerie, to be honest, and it is directed by Sujoy Ghosh, who has also directed Kahaani. We stocked up on the popcorn and drinks beforehand, because nobody wants to venture out into the hallways while watching a haunted house movie. But turns out, either I was really brave or I am not easily spooked.

The story is set in Goa, where everyone seems to be functioning at their own pace. Except a bunch of four enthu-cutlet kids, who have formed a ghost-hunters club, and looking to catch a ghost. Their curiosity leads them to the Bardez Villa, infamous for being the haunted house. And when a family of four (Jenny, her husband and two kids) moves into the villa, they accidentally end up getting the ghost out of the closet. That set off a chain of eerie happenings in motion. Of course, the bacha gang makes it their first ghost-nabbing project and they get on it with full dedication.

The first two episodes are intriguing and manage to captivate the audience’s interest. At this point, you still don’t know much about the ghost haunting the walls of the Bardez Villa, and you’re anxiously trying to connect the dots. And that’s a good thing, mystery was still alive. And then finally we get to watch the back story of the supernatural entity. There lived a woman in a village, possessing the ability to capture any person’s soul and basically killing them without laying a finger on them. The villagers burned down her house, calling her a witch. But before dying she passed on her powers to her son and helped him escape, who then goes on to be called Fakir in the show. I was still hooked.

He turns evil and starts murdering people. Finally after a lot of effort, he is nabbed by the police and given the death sentence. Of course, his spirit refuses to leave and ends up staying in a classic Remington typewriter in the Bardez Villa. Years later, in the present day he is waiting to be resuscitated on a red moon night and the whole plan is laid out. Meanwhile, Jenny finds herself right in the centre of this conspiracy, and figures out she is required to play a vital role in the ritual that’s going to bring Fakir back to life.

A lot of time is dedicated to the stories, which rather deserve a shorter time frame. For example, a lot of screen time is given to the tragic tale of Fakir’s mother, who was killed by the villagers. I mean if you want to fit everything in five eps, can we please focus on the horror that is happening in the present? Throughout all this, I was still waiting for jump scares or any scares at all at this point. However, all you get to see is people bleeding through their eyes and mouth before collapsing. Like so many times, that you begin to find it amusing, and numbing. This is coming from me, who can get startled by my own shadow after midnight. They even failed to make use of the “haunted house”. I am not saying the show is bad. What am saying is if you’re a fattu of the highest order, and you watch this show alone in the dead of the night, you still won’t be scared.

Let’s say, the adults in the show are very clueless about everything. And the kids are overenthusiastic and often land themselves and the adults in trouble. The little girl, Sam goes alone into a strange man’s boathouse and steals a typewriter (which apparently has the soul of Fakir) from the police station and basically leaks everyone’s secrets to everyone. Even in the climax, the adults seemed to be making all the wrong moves.

ALSO READ: I Pushed Myself To Watch The Whole Season Of Stranger Things 3. I Liked It But It’s Still Unnecessary

The climax too, was half-baked and uninspiring. All-in-all, there are just so many stories in this that none of them are fully developed. At the end, I don’t know if the show is about the typewriter, Fakir, Jenny or the kids. Add to this a very irritating and fraud ghost-whisperer, a shady math professor, a cheating husband being blackmailed, and so many other characters and you have just too many actors and not even a single fully-baked story. Honestly, I have seen saas bahu shows with fewer characters and parallel story lines. The end, leaves scope for another season, but here’s hoping Sujoy Ghosh will add more scares and let us hold on to some logic.