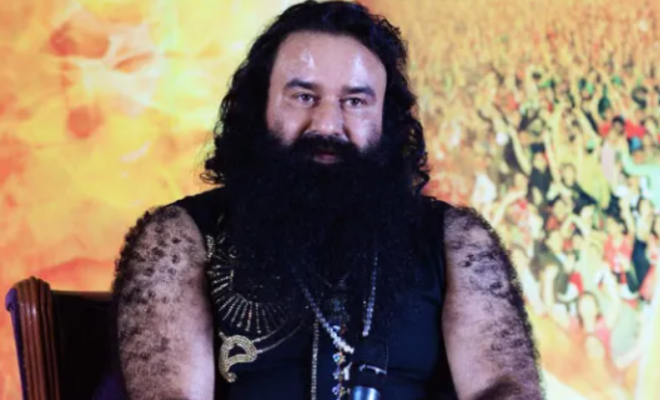 I believe that the Indian justice system is nothing short of a joke. Most people who actually should be on trial and behind bars aren’t and the innocent are spending their lives doing rounds of the court trying to seek justice. And this applied to every victim of every crime, no matter how heinous it might be. It took almost 5 years for there to be a sentence for Nirbhaya’s rapists and murderers. And there are multiple women who have been victims of assault and abuse who are yet to get true justice. Sirsa-based Dera Sacha Sauda chief Gurmeet Ram Rahim Singh was sentenced to 20 years in prison for rape and has been out on parole thrice since then. Currently, while out on parole, he has released a new song, calling his prison time a “spiritual” experience. Yeah, a joke is an understatement for this.

Gurmeet Ram Rahim Singh, the head of the Dera Sacha Sauda in Sirsa, Haryana, has released a 3.52-minute Punjabi music video in which he appears from his Dera in Baghpat, Uttar Pradesh. Videos of the Diwali festivities at the Dera were also released by him. Ram Rahim stated that his imprisonment was a “spiritual journey” when interacting with supporters on Monday night and claimed that he was writing a book about it. Ram Rahim, who was found guilty of raping two of his female disciples at the Sirsa Dera headquarters in August 2017 by a special CBI court, is currently free on a 40-day parole. He is currently in prison for 20 years. In 2019, Ram Rahim and three other people were found guilty of killing journalist Ram Chander Chhatrapati in 2002. He was found guilty last year, along with four other defendants, of planning the 2002 murder of the Dera’s longtime manager Ranjit Singh.

The Dera chief started communicating with his followers online virtually daily while his parole. Recently, at least two BJP leaders, including Renu Bala Gupta, the mayor of Karnal, and Ranbir Gangwa, the deputy speaker of the Haryana Vidhan Sabha, have been seen corresponding with Ram Rahim online. Jai Prakash, a candidate for the Congress in the Adampur byelection, also declared himself to be Ram Rahim’s “biggest disciple.” Weird flex but okay.

Amidst all this, the chairperson of the Delhi Commission for Women (DCW), Swati Maliwal, criticised the Haryana government for granting parole to Gurmeet Ram Rahim Singh of the Dera Sacha Sauda, who is currently serving a prison sentence after being found guilty of rape and murder. She took to Twitter and called them out for not taking the matter seriously. Maliwal made additional requests to the Haryana government to revoke Ram Rahim’s parole and imprison him. Manohar Lal Khattar, chief minister of Haryana, asserted earlier on Wednesday that he played “no role” in Gurmeet Ram Rahim Singh’s parole decision.

Also Read: Why Are Bilkis Bano Rapists Out For Good Behaviour When One Of Them Has Been Accused Of Molestation On Parole?

I personally don’t understand what politicians think. It is absolutely hilarious to me that they want the power and the position with no responsibility or sense of commitment toward serving the people within the country who voted for them in the first place. But then again, should we even be expecting anything from a profession that has a history of immoral actions and corruption? As a woman, I don’t get who these people expect us to turn to. Because clearly, no one is taking crimes against women and women’s safety seriously.

‘Ram Setu’ Trailer: What’s With The Women Hardly Having Any Dialogues In This Akshay Kumar Starrer?