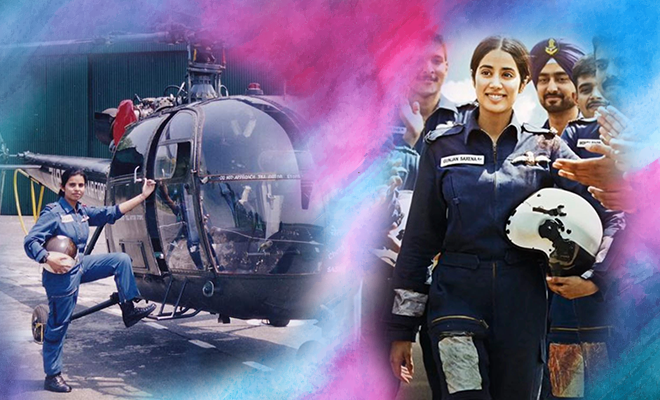 For A Hero Of Gunjan Saxena’s Calibre, Janhvi Kapoor With Just One Film To Her Credit, Is Not A Great Choice.

So the first poster of the film, ‘Gunjan Saxena – The Kargil Girl‘, that is a biopic of the first ever Indian woman to fly into a combat zone dropped today. And so, like any good writer, I did my research. And whattey story it is. And what a woman!  She was the only woman to fly in during the time of the Kargil War, her heroics are the stuff legends are made of. Which is why, we are entirely underwhelmed by the choice of actress to play her role. We are talking about Janhvi Kapoor, who will be seen donning the role of the IAF officer Gunjan Saxena.

Also Read : Janhvi Kapoor Is Willing To Put On Weight And Lose It For Her Roles And We Love Her Dedication

Janhvi Kapoor who was last seen in her debut movie Dhadak, opposite actor Ishaan Khatter, still has a lot to prove in terms of acting and work and we are all for her trying to make it big and better in the industry. However, we would imagine you would need a lot more in terms and acting prowess to pull off the role of a lady combat officer, skills that the relatively new Janhvi Kapoor may not possess just yet.

She’s just one movie old in the industry.  Janhvi Kapoor, in our opinion, has much to learn before she plays a hero like Gunjan Saxena in a biopic. Movies like Raazi, Neerja, Mary Kom were all played by seasoned actress like Alia Bhatt, Sonam Kapoor and Priyanka Chopra who have spent years in the industry honing their craft and delivering on roles that were heavy before they bagged themselves roles of this calibre. And it was years of working in the industry that helped them deliver a performance as compelling and as riveting as that. So naturally, when we laid our eyes at the first look poster of this movie, we had our reservations about her being able to do justice to the part.

Gunjan Saxena’s story is that of valor, strength and patriotism. Becoming the first woman to ever take flight in the combat zone of Kargil War back in 1999 and successfully carrying out numerous casualty evacuations, flying with faith in her Cheetah helicopter and carrying out her duties with utmost commitment and pride, Gunjan is a force to reckon with. To be able to reflect all of that, and with passion- it may have come to Janhvi to early in a career. I mean, for a movie about a woman taking flight, we’d hate for it to take a dive instead with someone who has been known more for her gym looks than her acting till now. And don’t get us wrong, we aren’t here to put down an aspiring actress who is just as hardworking as others, but maybe there is a time for everything.

Her co-star for the movie, Pankaj Tripathi who will be seen playing her father in the biopic, however did share nice words about the actress as he said, “I liked playing father to Janhvi Kapoor in the film. A great bonding has developed between us while working on the sets. I am having a lot of fun while shooting for it. Janhvi is a very sincere and well-behaved actress. She respects me a lot and I too respect her for the sincerity and commitment towards her work.”

At this point, we can only hope that her acting and the movie soars as did Gunjan, but guess we’d have to wait and find out for ourselves. The movie is set to hit the screens on March 13, 2020.

Also Read : Janhvi Kapoor Gets Trolled For Holding A Book Upside Down At A Book Launch. She Is Only Human, Cut Her Some Slack Guys!

Karisma Kapoor Changed 30 Outfits For Her Song, Jhanjhariya. And We Can’t Even Manage One