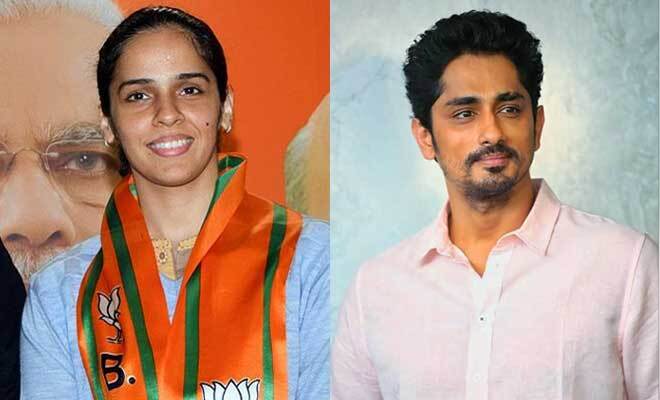 Time and again men across the world have put down women for their opinions and voice. We’ve already established the fact that no one likes opinionated women. And the best way to shut up an opinionated woman is to either troll her or pass a sexist or degrading comment. Men have been using these dirty tricks to shut women up but this time we’re in no mood to let it slide. Rang De Basanti fame actor Siddharth recently faced severe backlash over his rather distasteful tweet criticising badminton player Saina Nehwal’s tweet on Prime Minister Narendra Modi’s recent security lapse in Punjab.

Now, before I go further, let me point this out—the Tamil actor used sexual innuendo to shame the badminton player and it’s extremely disgusting and rather shameful. Following the news of PM Modi’s convoy being stopped on a flyover in Punjab’s Bathinda due to the protest by farmers last week, badminton player Saina Nehwal raised concerns over the same in a tweet. “No nation can claim itself to be safe if the security of its own PM gets compromised. I condemn, in the strongest words possible, the cowardly attack on PM Modi by anarchists,” read Saina Nehwal’s tweet. ​It was after this that actor Siddharth’s rather crass sexism came to light.

Quoting the Olympic Bronze medallist’s tweet, the Tamil actor wrote a comment that read, “Subtle cock champion of the world… Thank God we have protectors of India. Shame on you #Rihanna.” I honestly do not have the words to condemn the actions of actor Siddharth. It’s a shame that we have to raise our voices against a public figure for being disrespectful towards women. That’s not the kind of example we need to be setting for the next generation.

And netizens seem to agree with us because they called out actor Siddharth for his ‘sexist’ comment. Following the severe backlash, the actor issued a clarification with regards to his tweet but we’re honestly not satisfied with his explanation. Siddharth shared the reference he made while pointing out that his intention was not to ‘disrespect’ the athlete. Take a look at his tweet.

In fact, National Commission for Women has taken cognizance and written to the Maharastra and requested for an FIR to be registered against Siddharth. They have also written to Twitter to block the Tamil actor’s account and take appropriate action against him for the derogatory comments made by him. In a tweet, the chairperson of NCW point out that actor Siddharth need ‘a lesson or two’ and asked Twitter India why his account still exists.

Taking serious note of the matter, Chairperson @sharmarekha has also written to DGP #TamilNadu to take prompt and strict action against the actor. The action taken in the matter has to be intimated to the Commission at the earliest. https://t.co/pW1hT9zz6W pic.twitter.com/A3hefYp9qZ

Reacting to the backlash faced by the actor over his comments, in a conversation with News18, the badminton player pointed out that while she’s not sure what he meant, she used to like him as an actor but his behaviour was ‘not nice’. She further added that he could have had a better choice of vocabulary.

Saina Nehwal’s father also reacted to actor Siddharth’s comments in an interview with the media. Condemning the statement made by the actor, Harvir Singh Nehwal said, “He should apologize for it, no matter if he made these remarks intentionally or unintentionally.”

And while we do agree, no good is going to come from a forced apology.