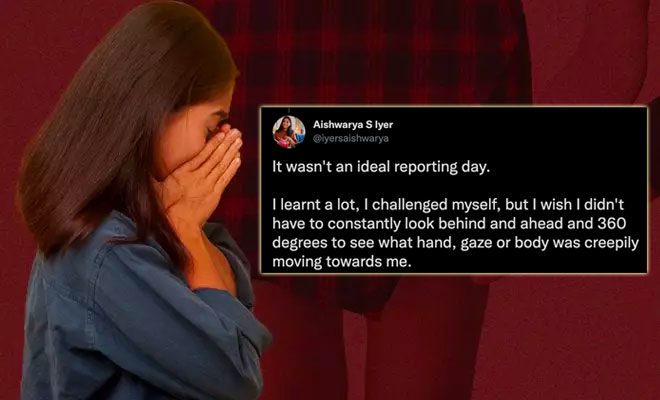 Female Journalist Reveals Her Reporting Ordeal, How Men Touch Their Crotch Around Women

When it comes to public etiquettes, let’s face it, Indian men have a long, long way to go. And often, they use this low expectation of them to stoop to a whole new level in eve-teasing. It’s not always the cat-calling or the leering. The worst out of the lot is when men scratch their crotch in public, particularly when women are around. I mean, it’s seriously disgusting. And as bad as things are for the women in general, these things get ten times worse for female journalists who have no option but to go working in the field, smack in the middle of huge throngs of men. One such female journalist took to Twitter to share her experience of Indian men touching their crotches near women and other issues that female reporters face on a daily basis. And it makes the bile rise up in my throat.

Recently, Aishwarya Iyer, an Indian journalist, took to her Twitter to express the disgust and disappointment she feels when working in the field. She spoke about how she sees Indian men touching their crotches when women are around, or the way they make vulgar gestures when in public. And to top it off, they crowd near a female reporter when she’s doing her job. What’s worse, when the woman calls them out on it, they continue to do it, unperturbed.

1/4 Reporting on the field.

Men need to STOP touching their crotch every time a girl is around. And in the event she points it out (like I did at the Kisan Mahapanchayat), they smile and laugh. Then shamelessly stand 2 meters away and do the same damn thing again.

I was interviewing a man from the Balyan Khap & a young man came out of nowhere & started eating ice cream. I told him to move, so I could get on with work, & he said, "But I'm eating ice cream." When I walked away to speak to other farmers, he followed me with his ice cream.
2/2

To enter the grounds, you had to enter a gate. When I got there too many men were coming in/out. I stood and waited. Didn't expect anyone to help, but definitely didn't expect men to crowd behind me the moment I decided to step in. I pulled my selfie stick to ensure distance.
3/4

It wasn't an ideal reporting day.

I learnt a lot, I challenged myself, but I wish I didn't have to constantly look behind and ahead and 360 degrees to see what hand, gaze or body was creepily moving towards me.
4/4

Also Read: Journalist Neha Dixit Reveals She Has Been Stalked And Threatened With Rape, Acid Attack And Death For Several Months Now. Just For Doing Her Job!

Most of the replies to the journalist’s tweet consisted of women agreeing to it and stating how they’ve also had to go through these things in their everyday lives. Be it while simply walking down the street, or in crowded public transport, women have to constantly be alert to ward off unwarranted touching, lecherous gazes, this whole disgusting ‘crotch touching’ phenomenon that is common in middle-aged men.

Unfortunately it’s an every day thing for a lot of women who chooses public transport, goes out to the market, or go out anywhere to work. You just cannot stop being cautious about your body. https://t.co/FGYj7rMJJs

I have seen this ugly gesture by few men whenever they are near women. Never ignore these signs. If no one is around he might be a potential creepy/ even a r@pist. https://t.co/393zNTu6Kh

As another person pointed out how sometimes, this crotch-scratching gesture is reflexive from years and years of bias, and many men don’t even understand how that can be problematic to women because they were never told it is. Sigh.

These are real issues facing our society. More than anything else, it’s the unconscious bias that most Indian men have. They don’t even know the problem. Thanks for highlighting this issue. It’ll probably take couple of generations to bring a real change … sad!

I am sorry you had to go through this. I feel your pain, it's never easy for women especially on the field. Use those elbows and knees. Take care, keep fighting and continue good work.

This is a universal phenomena not just restricted to rural India. I faced it in a UN office in delhi a few years back! Finance officer used to keep doing it when I would go to his room. Reported it. Some people did not beleive it & others told me not to go for any work discussion

And honestly, I agree with the journalist. All the men out there, let me speak for most women of the country—scratching your crotch in public, making vulgar gestures at us, or leering is not acceptable. If anything, it makes us feel disgusting and uncomfortable around you.