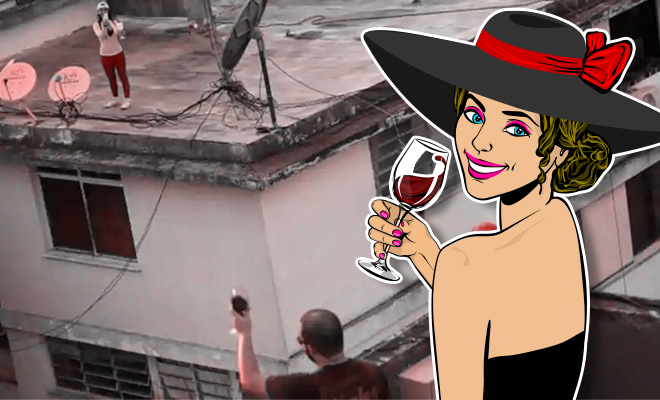 Everyone In This Neighbourhood In Venezuela Gathers On Their Rooftops To Share A Bottle Of Wine. Looks Fun But We Hope They’re Careful

Now that we have access to alcohol, several of my friends are drinking at home, having a can of beer while working or one to give a refreshing end to their day as they Netflix away. Some of my friends are having a solo party even, with some wine and homemade pizza. And as much as I really love alcohol, especially beer and wine, I don’t get the same feel while drinking alone unless I am having coffee. Even cutting chai is better when shared with friends.

Of course, these are now just memories that never fail to make me smile. When you’re enjoying a drink and conversations or simply having someone sharing the same experience as you make it so much more fun. Now that’s not an option for anyone but hey, this neighbourhood in Venezuela is still socialising, but from a distance.

Berta Lopez, a real estate agent in Venezuela revealed that she was worried she would get bored and lonely in this quarantine but seems like the rooftop of her building is the new cool place to be. She said that people meet on the terrace to enjoy the sunset, listen to the music and that they have also made friendships with those on the terrace of nearby buildings.

Apparently, they started a tradition of having wine together by sharing some out of a plastic container. They would tie it to a fishing line and send it to someone on a nearby building. That person would pour some out for themselves and then send it back. This would be shared among several people in the same way. “Rooftops were usually a place for maintenance (equipment), they’ve turned into a space to spend time with neighbours and with neighbours from other buildings,” said Lopez. She further added, “It has motivated me to be more in contact with nature, to spend a little less time on social media and on my phone.”

ALSO READ: This Viral Video Of Italians Clinking Their Wine Glasses From Their Balconies Is All We Need To Cheer Up Today

While that sounds fun, I wonder what happens to social distancing when so many people are touching the same plastic container. Are they santising it each time? We don’t know. But unless they are doing that, the whole purpose of quarantine is defeated.

ALSO READ: Three Grandmothers Who Have Been BFFs For 40 Years Moved In Together To Binge On Netflix And Wine While In Quarantine. We Want In Too.