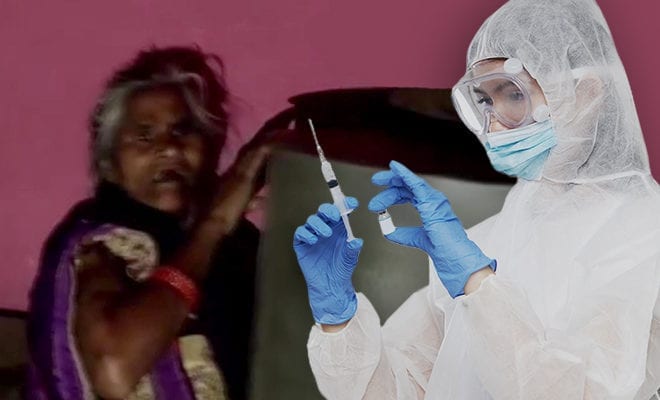 There was a time last year when we were all extremely apprehensive about the COVID 19 vaccine. At that point, they were still being clinically tested but we had heard horror stories about them causing baldness, kidney failure and even death. But once the vaccine drive began and we got a better sense of the side effects, people realised that getting vaccinated is the fasted way to eradicate the coronavirus. Here’s the thing though, this awareness is only widespread in urban areas. In rural and tribal areas, people are terrified of taking the vaccine. So much so that recently an elderly woman literally hid behind a drum because she feared the COVID 19 vaccine.

In these rural areas, vaccine hesitancy is a serious problem. A video of the elderly woman hiding behind a drum, terrified of the COVID 19 vaccine has gone viral. There needs to be more awareness. More literacy about the coronavirus and how the vaccine will work to fight it. This viral video was shot in Etawah’s Chandanpur village. According to reports, this village has a population of around 1,100 people. but the village head said that only 40-45 people have been vaccinated. This is a terrible statistic that needs to be rectified.

A vaccination awareness team led by Etawah Sadar MLA Sarita Bhadauria visited the woman’s house. She has been identified as Har Devi. As seen in the video, when she saw the vaccination team coming she hid behind a drum and refused to come out as she was terrified of the vaccine. She only came out after being told that she will not be vaccinated right now.

People are afraid of taking vaccines. We're trying our level best to encourage them. Only 40-45 have taken jab in population of 1000-1100: Village head pic.twitter.com/yc1198qier

Also Read: State Governments Begin To Host Vaccine Drives For Pregnant Women But There Are No Takers Yet

MLA Bhadauria said, “People are mostly uneducated here in villages. She was an old woman. We are campaigning in the village to encourage more and more people to get vaccinated. When we went to her place, she was hiding behind the door. As we started to speak to her, she went inside and hid somewhere. We understood that she was scared. She was even saying that she will get a fever after vaccination. But after we explained to her, she agreed to vaccination.”

Do you know what’s extremely ironic? A lot of folk have held poojas in the name of Corona Devi and flocked to temples in massive maskless crowds. But now, when it’s time for them to get vaccinated and safeguard themselves and their families, they are apprehensive and scared. What a twisted sense of logic, isn’t it?

Har Devi’s behaviour and attitude towards the vaccine has made it more than clear that people in the rural areas haven’t been given credible information. Awareness drives need to be held. Schemes and initiatives need to be put in place. If we want even a small fighting chance at eradicating the coronavirus, everyone in the country needs to be vaccinated. We can’t afford to have people hiding behind drums, terrified of the one thing that might save us.