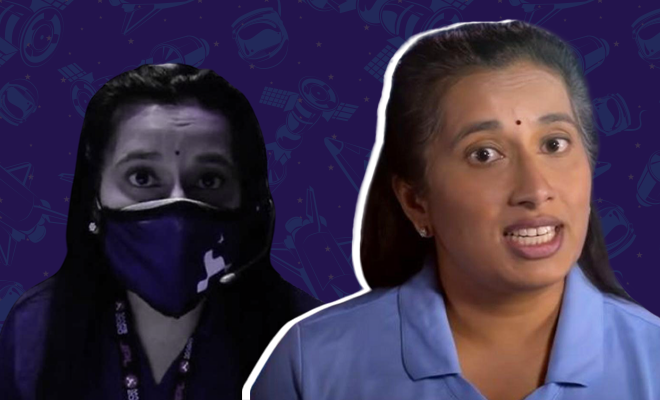 Dr Swati Mohan, The NASA Scientist Leading The Mars 2020 Mission, Says Diversity Helps Innovation. She Has Made Us Immensely Proud

Unless you live under a rock, I am sure you’ve heard of NASA’s Perseverance rover that landed successfully on Mars recently. But did you know that spearheading this undertaking of massive proportions was a doctor of Indian-American origin, Dr Swati Mohan? She led the Mars 2020 mission team by virtually guiding, navigating, and controlling the operations of the spacecraft carrying the rover from NASA’s Jet Propulsion Laboratory in Pasadena. She announced the rover’s successful touchdown on Mars. In her words, she was the eyes and ears of this operation. She even began trending on Twitter as the ‘Lady With The Bindi’! Dr Mohan’s role in this mission has filled us with immense pride. She proved that women too can dream big and reach for the stars, in her case, literally!

We’ve all seen the pictures of Dr Swati Mohan sporting that tiny bindi in the control room after the Mars rover landed successfully. The ‘Lady with the Bindi’ they called her and it has resonated with millions of Indian women who were left teary-eyed as Dr Mohan successfully carried out the Mars 2020 mission. I am sure it reminded them that there is so much more beyond the social confines of gender norms and you don’t have to lose your culture and values to make a difference in the world. We love and appreciate everything about this woman!

In an interview with TOI, Dr Swati Mohan talked about her role as the guidance navigation and control lead for the Mars 2020 mission and what that moment, when the rover successfully landed on Mars, felt like. As you can probably imagine she was incredibly nervous but that moment when she announced the success of the mission was like no other.

The voice you heard behind Mars rover landing is of Dr Swati Mohan. A B.S from Cornell in mechanical & an M.S. and Ph.D from MIT in aeronautics. She is Guidance, Navigation and Control lead for @NASA Mars Rover. pic.twitter.com/tY2csB5rxA

She said, “I had this flowchart taped onto my monitor of what to say if things didn’t go right during touchdown… I’m just glad we didn’t have to go down that path. It was a big relief. (After the touchdown), we celebrated with the team … There was a press conference after which I came home to my family and hugged them. They were super proud and congratulated me.”

Being an Indian woman at NASA does so much for the representation of Indians all around the world. According to Dr Swati Mohan, diversity is part of the reason why the Mars Rover was able to succeed. She says that “diversity helps with innovation”. If only more people in the world understood this concept, we could probably have achieved so much more. The young scientist said that despite being brought up in the USA, she holds her Indian roots very close to her heart. Hence the bindi. Her parents raised her to have strong Indian values and we are completely here for this.

Dr Swati Mohan said, “My parents raised me with strong Indian values and I feel like they did a good job at helping us balance both cultures. I would have to say that, in my perspective, JPL is incredibly diverse. I am not the only woman of colour. I am not the only Indian woman or the only woman or non-binary. Everyone is respectful of each other. And I think that’s part of the reason that Perseverance was able to succeed… I definitely think diversity helps with innovation.”

Got choked up seeing @DrSwatiMohan and showed my daughter. First thing she said, "look she's wearing bindi too AND driving a rocket." – (she's 4 lol) Representation matters so much. Dr Mohan is a rockstar- thank you. <3https://t.co/1Si2zIltn0

Moving on, Dr Mohan explained the objective of this mission. She said that if they can find life on Mars, it will help them better understand how everything evolved on Earth. Now, we don’t know if aliens are or aren’t real and let’s not go down that rabbit hole but here’s hoping that Dr Mohan’s mission is a grand success. And who are we kidding, everyone wants to know whether there is life out there or are we truly alone in this humungous universe?

Talking about it she told TOI, “If we can understand whether there was life on Mars, we can maybe understand how it evolved on Earth. Understanding how life evolved will give us an idea of whether or not we can expect life elsewhere in the solar system And that really comes down to the fundamental question — are we alone in the universe? Is life unique to Earth here or is it possibly everywhere, and we just have to keep trying to find it?”

Aliens or not though, we are immensely proud of Dr Swati Mohan!