Disneyland Paris Apologises To Woman Stopped From Breastfeeding At The Park 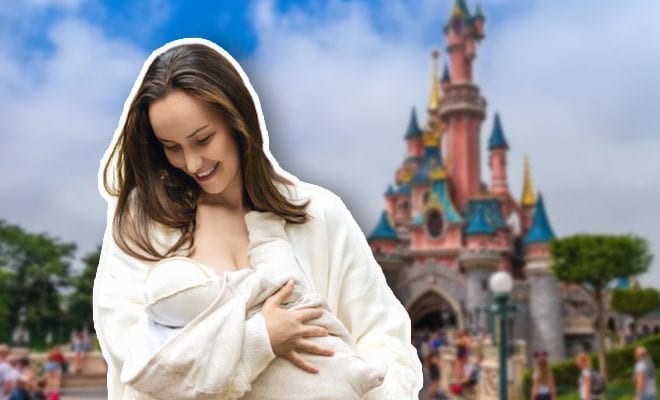 I feel it is incredibly sick to sexualise and stigmatise breastfeeding. She carried a baby in her womb for nine months, went through the many bodily changes, pushed a baby out and is most likely sleep deprived. She doesn’t need the additional hassle of finding a private space for feeding her baby. People who get uncomfortable with the sight of a woman breastfeeding her baby need to grow the f*ck up. Recently, Disneyland Paris had to apologise to a woman who was stopped by security guards from feeding her baby.

Twitter user @marieastier had shared a picture of a woman holding a baby and the Disneyland Paris security guards talking to her. The user revealed that the guards were asking her to go somewhere else to continue breastfeeding or stop it.

The Australian woman, Laura who was feeding her two month old baby told AFP that she felt “intimidated” and “vulnerable” as three guards surrounded her and asked her to stop breastfeeding. When she asked the reason for this, they said it was for other guests coming from different cultures.

The picture became viral on the internet and netizens were enraged by such insensitivity to breastfeeding women. That is when Disneyland replied saying that it has special dedicated rooms for mothers with “breastfeeding seats” apparently. France’s junior interior minister, Marlene Schiappa wrote on Twitter, “Breastfeeding a baby is not an offence. It’s good that you have dedicated rooms but no one knows when and where a baby will be hungry.”

Later, Disneyland apologized that it deeply regrets the whole situation and that there are no restrictions on breastfeeding anywhere in the park.

ALSO READ: Breastfeeding Olympians Will Now Be Allowed To Bring The Babies To The Games. This Is A Landmark Move

Really, what is wrong with the world? We are in 2021 and we are still cringing at women breastfeeding their babies? And where is it coming from? The fact that female bodies are so sexualised that people are disgusting enough to even sexualise a mother feeding her baby. Really, if it makes people uncomfortable, they can have designated areas instead of women having to face the trouble. Also, a little counselling in those designated areas for these people would be a good addition!