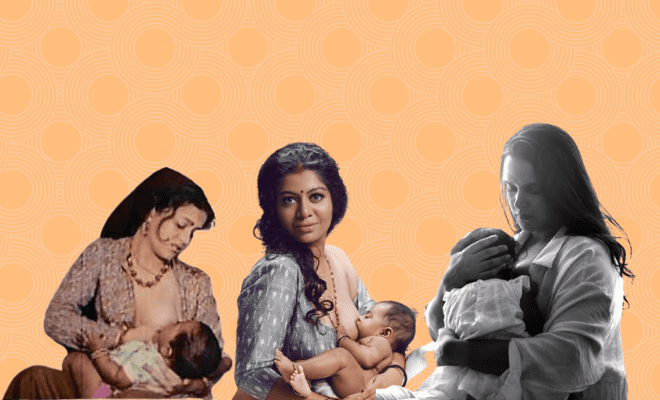 Breastfeeding And Bollywood: Can We Desexualise Lactating Mothers, Please?

Decades ago, in Friends, Chandler and Joey get super weird about Carol breastfeeding her baby. They were grossed out and awkward – not because Carol was doing something so strange but because the boys were being juvenile about it. But everyone else made sure to educate them on it! Here so many women are facing a lot worse when it comes to feeding their babies. They are often met with perverseness. Like how disgusting do you have to be to sexualise a mother feeding her baby? Sometimes they are met with disgust. The same people will be chewing with their mouths open but have issues with a baby sucking away for food?

They say India is a breastfeeding nation, the practice being highly recommended by our society, spiritual beliefs and even medical professionals. Yet, a mall authority had the guts to go up to a woman and ask her to breastfeed her baby at home because it’s a “home chore”. That agitated moms across the country – why should a woman not be able to feed her baby in public? Turns out, a survey by Momspresso.com revealed only 6 % of mothers find designated areas to feed their children. So if there are no designated areas and shady men sexualise your breasts, what are lactating mothers supposed to do? Stay at home? As if the pregnancy and delivery wasn’t difficult enough?

The survey revealed most common reasons of women hesitating in breastfeeding their babies in public are lack of hygiene (53%) and stares from people (47%).

When I tried reading up on the Anu Agarwal breastfeeding controversy, search results had the clip I was looking for…on pornsites! Just a mother, feeding her baby has the word sexy attached to it and there are several men out there shagging to that scene. In the scene, Anu Agarwal takes the baby and sits down peacefully nursing him. A man passing by peeps into the room and loses his shit seeing her breastfeed the baby. That may have irked many but really, the problem lies in the cheap perception of people.

Mandakini’s breastfeeding scenes in Ram Teri Ganga Maili have been touted as bold and rather unnecessary, by many. So much so that this movie was never allowed to be watched in our living rooms and our dadis and naanis refuse to even acknowledge that something like this existed. Maybe they don’t want the men and children of the house seeing breasts. And that’s how you sexualise them even more! Even in the scenes, you could feel the men perversely looking at Mandakini’s breasts as she fed her baby.

Back in 2018, a south Indian magazine found itself in the centre of a legal controversy as it featured a woman breastfeeding her baby on the cover. Kerala HC however observed that there is nothing obscene about it and obscenity lies in the eyes of the beholder. “Also, a mother is a mother. Nothing can be obscene about her feeding her child. When a child needs to be fed, it needs to be fed! Mothers must bravely do the needful as it’s only good for their child… Let a woman be a woman. Stop judging and dictating! Start respecting!,” Divyanka Tripathi was quoted by Spotboye.com.

Time and again, we see celebrity mothers stepping forward to support breastfeeding by uploading pictures of them while at it. Neha Dhupia shared an aesthetic still of her feeding her baby and spoke about the pressing need to desexualise lactating mothers. This was followed by a crass comment a perverse man left on one of the pictures of mommy blogger Anandita Agarwal. The user had commented asking a picture of her breast-feeding baby. She ensured that she calls the man out for fetishising breastfeeding and sexualising a lactating mother.

What followed was Neha Dhupia, who is the founder of Freedom To Feed, thanking Agarwal for taking a stand. “Thank you @crazylilmum for sharing this and calling this individual out. A mother has her choice of how and where she chooses to feed or breastfeed her child. However, time and time again we see people looking at breastfeeding mothers in a sexual manner,” Dhupia wrote.

“This insensitive comment is an example of why it makes it awkward for moms in our country. They must be called out…. let’s normalise breast feeding not sexualise it,” she concluded. She has also launched Freedom To Feed, an initiative to encourage women to feed freely and society to normalise that!

Thankfully, we don’t hear the ‘Maa ka doodh piya hai…’ dialogue anymore. I mean, first they make it difficult and then use it in ways to abuse and insult each other. Keep women and us breastfeeding out of your sickly ways, please!

“While there has been extensive conversation around the benefits of breastfeeding, much less has been spoken about the actual challenges of breastfeeding at work and in public places. New mothers are intent on breastfeeding to ensure their babies get the best nutritional start possible, but they also need that intent to be supported by simple facilities,” said Parul Ohri, founding partner and chief editor, Momspresso.

ALSO READ: From Sharing Pictures Of Her Breastfeeding To Flaunting Her Stretch Marks, Ashley Graham Is Redefining Motherhood And We Love It