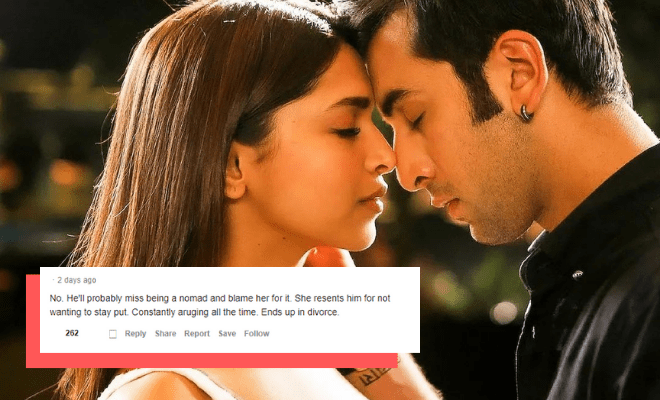 Reddit User Asks If Naina-Bunny End Up Together After ‘YJHD’ Ends. Redditors Are Divided Over Their Married Fate!

Many romance movies, series or books that we have come across all end in marriages. No one shows what happens post-marriage or after they get together. All popular couples like Naina-Bunny from Yeh Jawan Hai Deewani, Veer-Zara, Raj-Simran from DDLJ, and Hrithik-Kareena in Kabhi Khushi Kabhi Ghum are some of the most loved on-screen couples of all time whose stories end with them getting together and not what happens after they got together. Do the lovers happy a happy marriage or do they end up in divorce? A particular Reddit user has asked their fellow Redditors whether Naina and Bunny worked out as a couple after the film ended and the answers they received were quite interesting!

Redditor Asks If Naina-Bunny Worked Out

A Reddit user by the username @DebateDifferent25 has asked, “Do you think Naina and Bunny from YJHD worked out as a couple after the film ended?” They also pointed out what happened to them after they celebrated the new year’s together, do they stay or do they part ways?

One of them replied to it by saying that Bunny will miss his ‘nomad’ days and will blame Naina for shackling him in marriage. She, in turn, will also ‘resent’ him for not staying stable which will result in them arguing constantly and they will end up in a divorce. This seems to be a fair explanation, to be honest.

Another gave a counter explanation saying that travelling did not satisfy him anymore and he wanted to find his way. He also felt guilty for missing his father’s funeral as he was on a trek then. So, this incident must have changed him and Naina’s famous ‘Kuch na kuch chootega hi‘ gave him some perspective as well. And this is the reason why he stays with her. 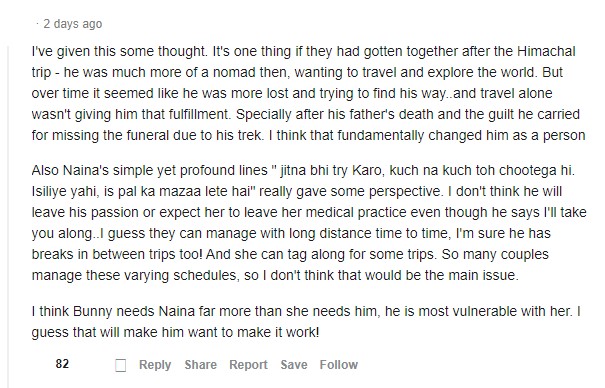 Another user said Naina was written as a ‘doormat’ character and her chemistry with Bunny is temporary.

Well, well, well! After reading these comments, it appears Redditors seem to have given this one thought!

#Trending: Netizens Are Sharing Various Indirect Ways Desi Parents Use To Apologise Instead Of Saying Sorry. We Can Relate