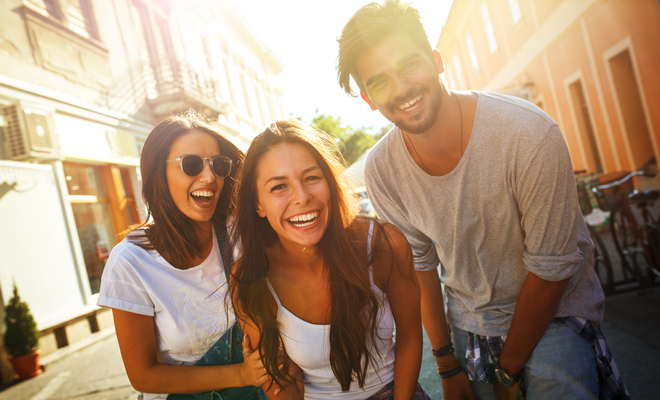 Who Is The Most Compatible Zodiac Personality For The Aries Woman?

We’re all guilty of skimming through the horoscope sections of newspapers, magazines, or websites. Whether we *actually* believe what’s in store for us or not is secondary. Finding relatable personality traits, anticipating the love of your life, checking to see if the money-gods will be good to your bank account — reading what’s written in the stars is intriguing for most of us. We know how excited you get about reading your weekly Hauterscope, so keeping this month’s star sign Aries in mind, here’s the lowdown on which sign is perfect for you, and which ones you should steer clear of.

Bold and fearless, the Aries woman is an enthusiastic one! A leader by nature, she’s constantly in control, from making plans to taking charge. The zodiac sign of Aries is mainly ruled by fire and that makes her super passionate.

She takes the reigns in her own hands and needs someone who is ready to level with her heat. With that being said, here’s who this fiery babe will gel well with, and those who she should be weary of — both romantically and in her friendships.

What happens when there are 2 alphas? One has to step down. Similarly, while the 2 Aries might get along in terms of personality traits and habits (which might be a tad bit boring), one of them needs to give up control and calm down a bit.

Secondly, sharing traits also means sharing quirks and faults, which may cause issues later on, especially in a relationship.

The horned twins, Aries and Taurus aren’t very compatible, although they share do a couple of traits. The 2 signs want different things from life and see things differently. While an Aries is rather out there, energetic, and inclusive, Taurus is a lot more relaxed, chilled out, and inclusive.

With relatively good compatibility, the personality traits of a Aries and a Gemini match in many ways — making things exciting and challenging. In terms of communication and intellect, Geminis have a need to teach, which is great, only if Aries is ready to learn!

The only issue with this pairing would be ‘trust’, as Aries tend to get more emotionally attached, while a Gemini tends to be a tad bit aloof.

Contrasting personalities, the theory of opposites attract doesn’t quite work in this pairing. While Aries is more energetic and outgoing, Cancer just wants to kick back and relax.

Sure, group interactions are doable, a one-on-one can be quite painful for both signs. A relationship for the 2 will be a hell of a lot of work, if both sides are willing to equally invest into it.

Aries With Leo
A perfect match, Aries is probably most compatible with Leo. Sharing similar traits, values, and beliefs, these 2 signs basically balance each other perfectly. Both are emotionally compatible, and understand each others’ needs and wants easily.
In terms of romance, Aries and Leo aren’t ones to be uber mushy, but since they are equally passionate, they will make things work at every chance they get.
Compatibility: 4.5/5

Aries With Virgo
Another match that’s definitely not made in heaven, Aries and Virgo usually do NOT work well. Sexually and emotionally incompatible, although the 2 star signs share interests and values, a romantic relationship usually won’t see the light of day.
If they still do end up together, both will need to adapt to each other’s traits.
Compatibility: 1.5/5

Aries With Libra
These 2 signs are super compatible when it comes to understanding each others’ emotions. However a lack of shared interests and trust can create havoc in the relationship. While Librans sometimes lack confidence, due to which insecurities arise, traits of an Arian can aggravate that.
Both stars are different in nature, but the fact that they share that emotional connect can override the issues that come their way (especially if they’re madly in love and just want things to work).
Compatibility: 3/5

Aries With Scorpio
Not the greatest match TBH, these 2 zodiac signs seem to bring out the worst in each other. Both are dominant by nature, they can both get rather jealous and possessive, which can prove to be deadly.
Compatibility: 1/5

Aries With Sagittarius
A friendship or relationship that has crazy amount of potential, both star signs come together like missing puzzle pieces. They both have a great need for honesty in their lives, which rules out any trust issues that may come up in the future.
A friendship that will last for decades, the fact that these 2 signs so deeply and mutually understand and respect each other makes things a lot stronger.
Compatibility: 4.5/5

Aries With Capricorn
Besides valuing independence and honesty, these 2 zodiac signs diverge on to different paths when it comes to everything else. Sexually and emotionally incompatible, an Aries/Capricorn combination will lack communication and intellect as well.
In short, compatibility issues will definitely arise at some point.
Compatibility: 1/5

Aries With Aquarius
An interesting relationship, Aries and Aquarius are both equally adventurous and like each other’s company. Personality traits for either signs are very similar, however, the latter sometimes needs distance from the former.
Balancing each other out, they both tend to provide support and encourage each other to strive better.
Compatibility: 3.5/5

Aries With Pisces
The neighbouring sign isn’t that great a match for Aries — they both share similar negative traits that can cause a lot of issues. A Piscean will undoubtedly make an Arian happy, but the emotions can also swing to making them sad, too. Traits of an Aries can overpower the softness of a Piscean, however, that can work in favour of the relationship, at times. With the intellect of Aries and the tender love of a Piscean, they can beat the odds of not working out. However, in general Aries and Pisces is a rocky match.
Compatibility: 2.5/5
GET HAUTERFLY IN YOUR INBOX!
Related ItemsFeaturedLifestyleAstroDatingAries