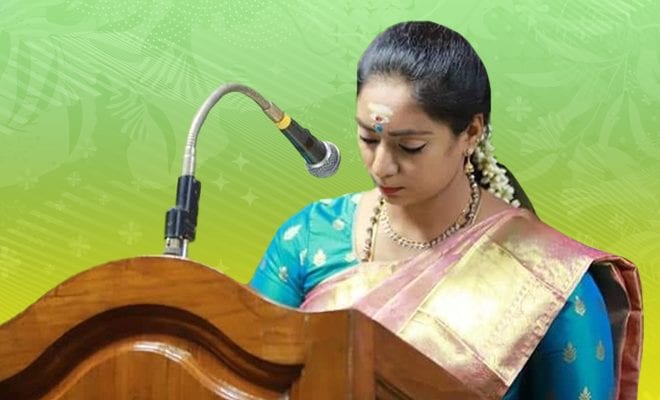 When it comes to publications, including where I work, there is no dearth of female representation. In fact, Hauterrfly editorial is an all-women team. So, often, I may take women representation in our workforce for granted. According to Times Of India, only 1 in 10 employees is a woman across industries, as reported by a study. Politics is one such field that doesn’t have too many women, and that too in senior positions. And if we talk about Puducherry, it got a woman minister, Chandira Priyanga, 40 years after the previous one. Late Congress leader Renuka Appadurai was the last woman minister during 1980-83.

“My aim is to educate and inspire youth for jobs. There is no difference between women and men and I will prove it with my work,” Chandira Priyanga was quoted by ANI.

"My aim is to educate and inspire youth for jobs. There is no difference between women and men and I will prove it with my work," she said pic.twitter.com/PjsZ49lX0j

Chandira Priyanga told Indian Express that people are now beginning to see ability, beyond gender. She added that families are also now understanding the importance of educating girl child and not inhibiting their daughters’ growth. “Not just in politics, even in other sectors, changes are happening only now. Families which were hesitant to provide education to their girl children now want their daughters to be on par with their sons. We have a support system now. Even my colleagues have started to see a person beyond gender. They understand that women are an integral part of the system. We had women in the assembly last time, now we have representation in the ministry. Whoever has the ability are now chosen beyond gender,” she told Indian Express.

Sure, we are progressing, undoubtedly. However, we need to catalyse growth and female empowerment to bring equality even in smaller, remote areas of our country. Chandira Priyanga said, “Empowering women with several schemes, protecting child rights” will be her areas of focus and she wants to do “constructive politics.”

We really hope there isn’t such a wide gap before another woman makes it to Puducherry’s cabinet and that Chandira Priyanga is able to bring women empowerment through effort and example.

ALSO READ: Jacinda Ardern Is The Kind Of Leader Indian Politicians Could Learn A Lot From