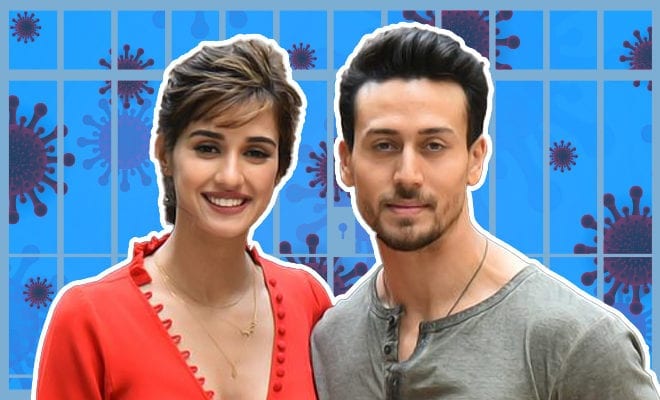 Ever since we have been struck by the vicious coronavirus, countries across the world came up with several health guidelines, restrictions and rules and regulations that were required to be followed by the citizens to curtail the spread of the virus. From having to wear mask at all times to being conscious about sanitising, there were a number of guidelines to keep in mind. Especially during this second wave in India, where lockdown restrictions were once again imposed during which strictly asked people to not step out of their houses beyond curfew hours. And this applied to people like Tiger Shroff and Disha Patani also.

A rule that was recently overlooked by celebrities Tiger Shroff and Disha Patani after a case was filed against the two for being out till after the curfew hours. Actor Tiger Shroff was found roaming near the Bandra bandstand on Wednesday evening with actress Disha Patani, several hours after the 2 PM deadline for restrictions on the movement of people was imposed.

Rumors quickly rose up claiming that the actors were enjoying a drive around the bandstand area after a workout at the gym. One verified Instagram account soon turned up with photos of the actor to support the claim and it was then that Tiger Shroff’s mother quickly jumped to his son’s defence.

Also Read : Tiger Shroff Says Disha Patani Doesn’t Like Him Paying For Their Dates Each Time. We Can Relate!

In retaliation, Ayesha Shroff asked the account handler to get his facts right for she wrote, “You got your facts wrong my dear. They were heading home and cops were checking Aadhar cards on the way. No one is interested in roaming at a time like this. Please get your facts right before saying such things.”

She also added in a separate comment that, “For your information, it is permitted to go out for essentials. Instead of bringing people down how come no one writes about the free meals he’s providing to front-line workers!! That’s because he himself doesn’t talk about it. So don’t judge.”

"Instead of bringing people down how come no one writes about the free meals he’s providing to front line workers," says #AyeshaShroff about #TigerShroff.https://t.co/5OsphIBdf9

You see, while we have deep respect for him for doing the right thing and assuming responsibility of distributing free meals to those in need during such testing times, what we can’t overlook is his breach of Covid restrictions, that are just the same for an a celebrity as they are for the common man. Just because someone is being a do-gooder doesn’t exempt him from being in violation of the law, and maybe next time Tiger and other actors out there, could only limit the use of their privilege to doing good, and not exploiting the law.

Also Read : Tiger Shroff And Disha Patani’s Instagram Banter Is Full Of Raw, Sexual Energy. Why Won’t They Accept They Are Together?