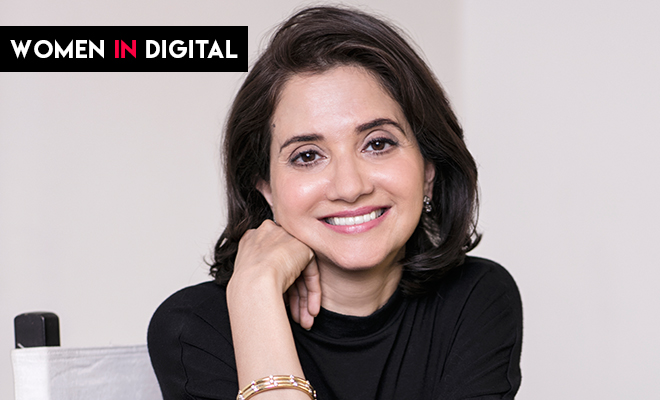 Anupama Chopra: “I Get Trolled All The Time And It’s Completely Fine”

We’ve all seen her on TV and have read her in-depth articles and movie reviews for years. Anupama Chopra is one journalist that filmmakers want to impress, because her verdict can make or break their movies at the box office. One of the most influential critics in the industry, she is the woman every other one looks up to.

After an immensely successful career as a journalist, film critic, and TV host, Anupama founded her own digital company, Film Companion, in 2014 and, ever since, it has been every movie lover’s faithful buddy. She has seen it all, so if there is someone you need to take notes from, it’s her.

Funny, lively, incredibly down-to-earth, and always hungry to learn and teach, Chopra is an inspiration and you need to know how she does it all.

Here, Anupama chats with Hauterfly about how she started building videos that are now YouTube sensations, and why her son thinks she is a little lame!

I had an English television show on Star World called The Front Row With Anupama Chopra, and and a Hindi one called Star Verdict on Star Plus, both of which wrapped up in 2014. That’s when I really felt that film reviews should be done more regularly.

So we just decided to try them out on YouTube because we didn’t know anything about the digital space or how a digital company works, but what we knew was how to produce content and produce videos. And literally, without any thought or even a business plan, with nothing at all, actually, we decided to start Film Companion.

After a meeting with Vijay Nair of OML and a couple of friends, Rasika (who was also my boss at Star World), and Tarun, where they said reviews need to be out there, we started out.

Tell us a little bit about what makes your company special.

You know, I feel like what makes Film Companion special or different is the content. We don’t do gossip; we don’t do celebrity journalism; we don’t do blind items. I’m interested in how a director thinks, how an actor works, the latest film industry trends — and that is what sets us apart from the other Bollywood digital portals out there.

Also, it is a platform that does pure, honest, engaging journalism around cinema, without any agenda or marketing policies. It is a platform driven by passion and excellence.

At what point in your journey did you realise you had something special on your hands?
The truth is, it is very, very hard financially to make an operation like this work, and because we don’t talk about things like red carpet looks, it is definitely a tougher space to be in. But the feedback I get (and being a a digital platform, it’s all instantaneous) is what makes me love digital journalism.

When viewers write in saying they love what we do, it feels great.

Recently, we spoke to the director of the Malayalam movie, Angamaly Diaries, in which he has shot an 11-minute climax scene in a single take. He said that this is what true cinema really is and this is what will make it travel to people who don’t even know the language. Things like this tell you that there is an audience out there who is interested in more than just the surface level news.

Starting a company is no easy feat. What’s been the most rewarding part of the process?
All my life, I have worked for large corporations. The majority of that time, I was a print journalist with India Today, and then I worked with NDTV and Star World, which are massive corporations and where I had everything — even a trailer with my name on it. But now, all we have is a hand-held camera with no money to do anything!

But the satisfaction of building this and watching it come together, from 3 people in a room to a fantastic team of 10 who are driven by a genuine love for cinema, is a joy.

We did our first piece of branded content with Microsoft last year, Beneath The Surface, and that really helped us move forward. You need someone else to validate what you are doing. And what is great is that we’ve grown organically. We’ve never bought any followers or news. Every hit and like on the channel is an achievement.

Where do you think you’ve had your biggest struggles, and how have you overcome them?
For me, it was to understand the digital medium. I am not from the generation who grew up with social media and I’m just very old-school, with training in print journalism. I literally knew nothing, and the first video we made was so funny and embarrassing, that we sat in front of the screen and wondered how the number of views will ever increase.

I have gone up to people with a notebook and pen and asked them to teach me everything digital. It is exciting to learn new things every day, and then wake up every morning in a state of panic, because the truth is, you know nothing! Each day feels new with so much happening.

Just when I thought I had figured out Twitter, Instagram came along, and now my son is trying to teach me Snapchat. He is so embarrassed because of how lame I am. It is a lot of fun — you never get bored.

The struggle has been about having to know enough at all times.

Any challenges you face as a digital company versus a legacy media publication? How do you think you score over legacy media?
I had to unlearn a lot. Since I was a part of both print and TV journalism, there were a lot of things I had to do differently. There have been times when, in meetings, people have told me to stop producing such high-quality stuff, because no one on YouTube cares. But I care too much and that was difficult to overcome.

You have to go with the flow, and where digital really scores is the interactivity, which I have never seen before on any other medium. And it can either be bad or good. I mean, I get trolled all the time and that’s completely fine. It is the instant response that makes it work.

What, in your opinion, is the best thing about being a digital company?
There are no rules! You do what you believe in, what you are passionate about, and you will find an audience. You can write a 10,000-word article or produce a minute-long video — there are just no rules. It is you and your audience.

Lessons you’ve learned along the way that hold you in good stead today?
One, that you need to be yourself and be authentic to the person you are. Second, it is important to be consistent. If you start something now, you can’t just stop doing it 3 weeks later.

Do you think building a business as a woman — raising money as a woman — has more challenges?
I have never faced such a challenge just because I’m a woman. Also, maybe because this is the first time I’m doing something like this, on my own, that I haven’t experience it yet. I can’t really talk about the larger ecosystem.

If you had to go back and start over, is there anything you would do differently?
Honestly, if I could rewind, I would make a business plan. I would deep-dive into learning what goes into starting a digital business and be more prepared. I would think more before starting a venture. We were literally flung into the deep end on the first day, without knowing absolutely anything.

What else can we expect from your website in the future? Where do you go from here?
Last month, we started something called FC South, for which we have a National Award-winning critic, Baradwaj Rangan onboard, and he is looking at Tamil, Telegu, and Malayalam cinema. We want to keep growing like this and I hope someday, we get someone from Kolkata or Punjab, so that it becomes a national platform for pan-Indian cinema.

We want it to become the go-to platform for all film goers.