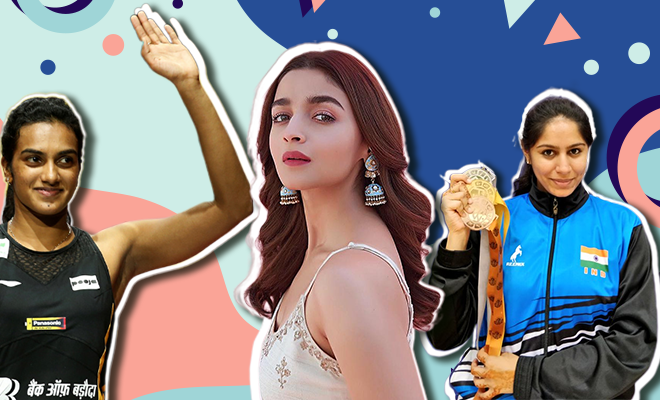 Alia Bhatt Gets Nominated For The Most Inspiring Asian Woman. When We Have Women Like Hima Das and P V Sindhu Right There. Why?

I find my job as a writer, particularly fancy and oddly satisfying most of the times, and more so during Fridays, when I am supremely enthusiastic about doing absolutely nothing over the weekend. Mainly because when you have to scroll through social media all day long as a part of your job, you don’t have much to crib about. Except what I came across today was thought-provoking and I decided to pursue the lead. This after coming across a tweet  that questioned Alia Bhatt’s nomination for the People’s Choice Most Inspiring Asian Woman for the year 2019.

But who's the inspiring Asian Woman ??
A nepotism product Alia Bhatt ? https://t.co/vN9IELeSml

For the uninitiated, yes Alia Bhatt has seemingly followed into the footsteps of our Desi girl Priyanka Chopra, after becoming the second Indian actress to be nominated in the People’s choice awards. But this news didn’t go down well with a select few for they questioned why in a time when women like Hima Das, P V Sindhu and Manasi Joshi are bringing such pride to the country, inspiration is still being sought from actresses and celebrities. And to be honest, we too found ourselves agreeing quite aggressively with the tweet.

Upon further probing, it came to light that since People’s Choice Awards is a ceremony that recognises individuals from the entertainment industry. The other nominees that have been chosen from across Asia are more or less actors or singers. Which made us wonder whether they really do have something to inspire us. I mean, think about it for a second. Doing your job as an actor doesn’t or perhaps shouldn’t qualify you as worthy of a title like this. In fact, the women whose biopics these actors pick up, should be the ones to be nominated for these awards.

Because otherwise, what are we even lauding them for? Yes, they must’ve done some brilliant work in their professional graphs but as an individual, what more have they done to inspire the youth and the generation? Alia Bhatt, who is one of my favourite actresses, is still the one who has been promoting songs like Prada, which basically calls us women a gold digger. So unless that’s the kind of a message we want to spread across as a community, I really think there is a need to re-evaluate the kind of nominations such events put out in the name of inspiring individuals. Because if it doesn’t serve the purpose, do we really have a reason to feel proud of Indian actress that made it to that list?

Dear Internet, Nithya Menen Can Do Her Bit For The Kerala Floods Without Telling You About It. So, Calm Down.