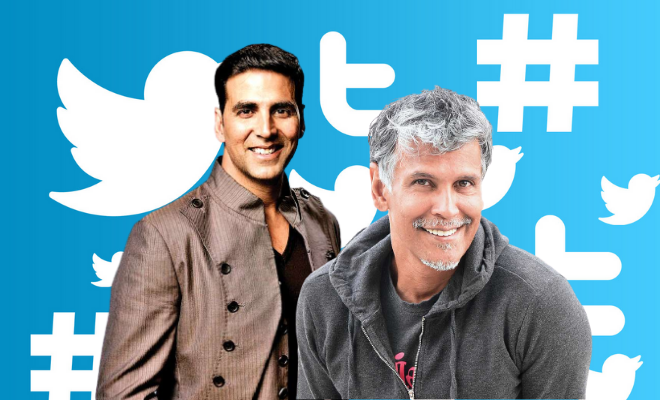 Every few months we come across a rape case that sends shockwaves through the country. We are badly failing our women. At this moment, everyone is furious at the situation in Hathras, UP where a 19-year-old Dalit girl died after being gang-raped by four men. The ghastly details of this case have left us all scarred and shaken up. All everyone wants is for the culprits to be brought to justice. And while most of Bollywood raised their voices condemning this rape, Akshay Kumar and Milind Soman received some serious flak for their tweets, which sought capital punishment for the accused.

Before I tell you why or what they tweeted, let me bring you up to speed on the case. On September 14th, the Dalit girl was reportedly attacked, raped and tortured by four upper-caste men, who are in jail now. The rapists dragged her off into a field by her dupatta. According to several reports, the girl was found with cuts to her tongue, bones in her neck were broken, and it was clear that several attempts were made to strangulate her. She succumbed to her injuries on 29th September. Yesterday, however, UP police reportedly decided to cremate her in a hushed-up way in the dead of the night without the consent of her family. They didn’t even let her family pay their last respects. As more and more details of this case emerge, it’s clear that we don’t care for our women one bit.

#Hathras victim burnt against her family’s will. Police locked family members & locals inside the house & forcibly burnt the body. Family couldn’t even see their daughter for one last time.

If torture done to the girl was horrific. This is beyond humanity. We’re finished pic.twitter.com/WkBiyHWLbF

I was deeply disturbed after reading these horrid details of what happened at Hathras. But I wasn’t the only one. Social media was spitting fire. It seemed like everyone’s accounts had turned into lava-spewing volcanos. They were asking not only for justice for that poor girl but also for an explanation for why the UP police handled this case the way it did. But what’s the point of all that rage? What’s the point of candle marches, protests and speeches? It’s all bark and no bite. Hell, even capital punishment doesn’t seem enough to stop monstrous men from preying on our women and leaving them for dead.

Speaking of capital punishment, that’s exactly what Akshay Kumar and Milind Soman got in trouble for. Both of them, in their respective tweets, asked for the accused in the Hathras rape case to be hanged.

Angry & Frustrated!Such brutality in #Hathras gangrape.When will this stop?Our laws & their enforcement must be so strict that the mere thought of punishment makes rapists shudder with fear!Hang the culprits.Raise ur voice to safeguard daughters & sisters-its the least we can do

In his tweet, Akshay wrote, “Angry & Frustrated! Such brutality in #Hathras gangrape. When will this stop? Our laws & their enforcement must be so strict that the mere thought of punishment makes rapists shudder with fear! Hang the culprits. Raise ur voice to safeguard daughters & sisters-it’s the least we can do.”

And Milind, in his tweet wrote, “Kill rapists in public.”

Now, we can understand the sentiment here. They wanted to extend their support, stand in solidarity and raise their voice. Which is a good thing. But their message is a little problematic. Why? Well, yes, we do need stronger laws but we have tried capital punishment and it does not work. Nirbhaya’s rapists were hanged just earlier this year. Priyanka Reddy’s rapists were executed last year. If capital punishment was the solution, these gruesome rapes would not happen anymore. The Hathras rape would not have happened. So while it’s the war cry for many people, it’s simply not enough. It’s a short term solution to a longterm problem. The issue is more deep-seated and merely hanging the culprits does not ensure other women don’t become victims.

One of the arguments for why capital punishment doesn’t help is because it has been handed out so rarely that it hasn’t been able to have the deterrent effect that it should. Moreover, the fear of being caught and subjected to capital punishment could force more rapists to kill their victims and silence them forever.

This logic is exactly what netizens set out to explain to Akshay and Milind. A lot of women also attacked them for being extremely ignorant. I have to agree with those women. Even though the tweets were shared in good taste, they came off as tone-deaf and crude. But then again, how do you expect men to understand any of this?

Check out some of the reactions their tweets garnered:

you know what? this is exactly what will happen and then people like you will forget whatever happened to the victim and all your hopes for "justice for the victim" will go down the drain. k!ll!ng them will be a mere distraction from the real problem. https://t.co/v1CTG6ukNO

Men, please keep your dick and guns in your pants and let us ask for accountability from the system that led to this.

Everything in the world is not a spectacle for your hormones. https://t.co/cmwBsnJpzW

Report this tweet for inciting violence. This does not help the victims. It creates kangaroo courts, mob lynching, violates human rights and justice. https://t.co/eCIJcCAocv

Its because of jokers (voters) like these, we have reached where we are today https://t.co/EhP2QHjruL

Death penalty for rape, written into law, incentivises rapists to try and silence/kill their victim. The #Hathras case is a grim reminder of this reality. Someone tell Akshay Kumar this. https://t.co/ALyrZuFOxJ

And solve nothing? At all? https://t.co/QklgSS68v1

Women: Can we be safe?

Society: We will kill your rapists.

Women: but we don’t wanna get raped

Society: We will kill your rapists. https://t.co/5LQUYGwmhh

Men would literally rather advocate murder than advocate feminism.

Because advocating murder is just a few strokes on a keyboard that they know has no personal consequences, whereas the other thing involves letting go of their own power. https://t.co/czT5D7JIVf

Like the telengana accused were killed? If that worked then Hathras rape wouldn't have happened, no? https://t.co/MbyAQVd7AW

This is not a debate for or against capital punishment. I am not going down that rabbit hole. This is simply a discussion about whether executing rapists is enough to curb the rapidly increasing cases of rapes in our country. History is proof that it isn’t. I believe what we need is a change in mindset. A more open mentality. People need to be willing to understand that women are not playthings. We have rights and deserve to feel safe and secure in our own homes. The solution lies not in capital punishment but in education. And more importantly, in prompt and transparent law enforcement and judiciary action that is free of any duress or political power play. None of which seems to have happened in Hathras.

Our National Data Of Crimes In 2019 Has Recorded 87 Rape Cases On An Average Per Day. This Is Extremely Alarming