After A Horrific Case Of Gang Rape Of A Teen, All Of Israel Stomped Down To The Streets To Denounce Sexual Violence Against Women. 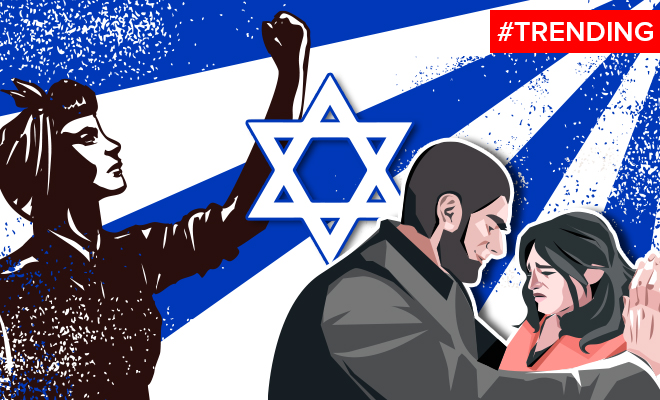 Back in 2012, when the bone-chilling Nirbhaya Rape Case made it to the headlines, for a moment it seemed as though the world stopped spinning on its axis and every one went silent not just to mourn the death of an innocent young woman, but also to mourn the death of humanity altogether. The upsurge in dialogues, protests, fights for justice all made us believe that probably the outrage of an entire nation would be enough to create an environment of fear and consequence and perhaps, keep something like this from happening ever again. Of course, we were wrong, and within months, new cases piled up, the horrors and the punishments long forgotten. Up until, another brutal case came along and for a short period, the rate of sexual violence slowed down again.

You see, we have become so habitual of learning by example, that somewhere along the way, it isn’t until we see one of us being sacrificed in the most unceremonious way at the hands of desperate and monstrous men, that we feel the need to not just question the status quo but also to make a statement that it can’t go on like this. Which is exactly what has happened in Israel, after thousands of Israelis have taken to the streets, stopped working and denounced sexual violence against women after the gang rape of a 16-year-old girl.

Earlier this month in Eilat, the news of a gang rape of a teenager shocked the whole of Israel as it did us, for it was reported by investigators that the number of assaulters were in double digits and that the horrific incident went on for long hours in a hotel room of Red Sea resort. 11 people have been arrested in connection to the case till now, 7 of which are minors. The investigations are still in process, but the entire population of Tel Aviv has already reached a verdict as they took to the streets to spur calls for reforms.

Almost 1500 people gathered in Tel Aviv’s Rabin Square, with smaller rallies taking place in the cities of Haifa, Kiryat Ono, Beersheba and chanted, ““No means no. What part of that don’t you understand?” “It’s not a mistake, it’s policy,” and “Stop, enough, blame the rapist.” During the end of this angry and powerful protest, 300 people marched down the city’s main Ibn Gabirol Street.

These demonstrations that were triggered after the incident weren’t just carried out by angry citizens, women and children but also supported by President Reuven Rivlin and Prime Minister Benjamin Netanyahu. One of the protesters and organizers for the demonstration shared, ” I had the luck to not be raped, but some of my friends were… I’m here in the name of dozens and hundreds of women who are saying, ‘Stop. Enough.’”

"One in five Israeli women was raped during her lifetime with 260 cases reported every day." #SodomAndGomorrah https://t.co/RoUIRPspka

She also went on to say, “I’m not a speaker or an activist. This is the first protest I put together in my life. I don’t represent any organization and tonight this is a personal gathering because we can’t bear to hear about more assaults or rapes.” Meanwhile, Tel Aviv Deputy Mayor Tzipi Brand said, “How is it that a 16-year-old girl was brutally raped right under our noses? The indifference of the system led to the destruction of a young girl’s life. We need to change everything — the language, the textbooks and the history books.”

And that is exactly what the need of the hour is, to be vigilant, preemptive and corrective enough to not fail our women any longer. To make sure that the threat of such horrific incident reverberates in every soul and that we are able to change the course of history that up till now has only been ever so cruel and brutal to women. We stand with Israel as they fight for justice and lack of sufficient punishment against perpetrators.

Also Read : “Twisted My Violent Sexual Assault Story For Her Own Use” Claims Amber Heard’s Ex-Assistant, As She Testified In Favour Of Johnny Depp. This Story Is Twisted.