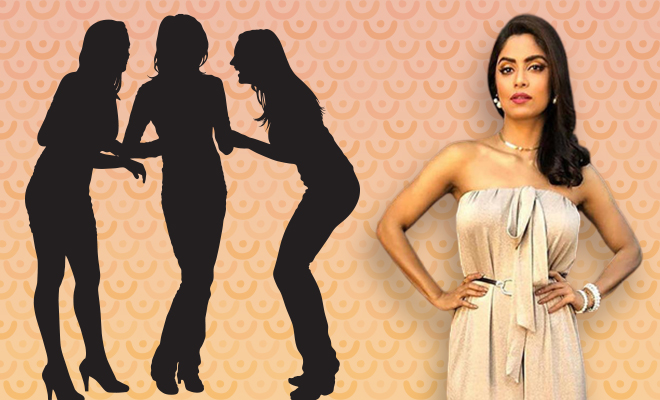 12 or 22, in a skirt or in a salwar kameez, among educated intellectuals or alongside the road among illiterate people, I have realised that when it comes to objectifying women, demographics don’t matter. You could be anywhere, wearing anything, and chances are you would still feel that male gaze upon yourself, constantly reminding you of you’re being measured based on your looks, body type and types of clothes. A rather unsettling yet true state of mind, that was recently brought into conversation by TV actress Sayantani Ghosh.

Opening up about her own experience with body shaming, Sayantani Ghosh recently had quite an unnerving interview where she talked about the kind of  impact such experiences had on her. The actress who is known for her role in ‘Kumkum – Ek Pyara Sa Bandhan’, stumbled on the topic after recently schooling troll who dared to ask her, her bra size on social media platform Instagram.

Recalling the incident, Sayantani shared, “To be honest, this wasn’t the first time when I had been subjected to such a disrespectful and cheap comment. Not just as an actor but even as a woman, I have been often subjected to uncomfortable gazes and comments. All these years, I avoided it not because of the fear of speaking up but I didn’t want to give any undue attention to these things.”

She went on to share, “However, this time around, I decided to vent it out through a long post. I realised that being an actor, there are higher chances that people would read and react to your post. So, I thought that if I could talk about important issues and if it encourages and inspires even one person to take a stand for themselves, then it’s worth it.” Couldn’t say we didn’t agree with her there.

Talking about how she was very young when she was exposed to such harsh body shaming, Sayantani said, “Since I began my modelling career very young, I have often seen people staring at my body or passing unwanted comments. People don’t understand that these comments can affect someone deeply.”

Recalling a rather hard-hitting and traumatic incident from her past, she decided to vent out as she shared, “One of the first instances that I recall is from when I was 17-18 and doing a modelling shoot in Kolkata. While we have always conceived models to be tall, skinny, and slim, I was slightly on the heavier side. A woman came up to me and passed a distasteful remark about my breasts. Often, I have seen that it’s not just men but even women who make us feel bad about our bodies. A lot of these issues stem from our conditioning and mentality which needs to change. We have so much modern tech at our disposal but if our thinking is still limited to how a person should look, then it’s sad.”

Going on to also touch base on how casually people throw around such hurtful remarks on women, without realising it impact, Sayantani commented, “People don’t think about how their one small comment can shake up and leave a deep scar on the other person. For the longest time, these remarks have affected me and I have struggled to not let these stereotypes affect me.” As they might have so many of us.

She then focused in the importance of self-love and and urged how it was imperative to learn not to fall in the trap of social media. “It can be harrowing to live up to the yardstick of the society when it comes to the ideal body type. But we have to keep on practising self-love and accept our bodies, as that’s the only way to break this vicious cycle. It’s an everyday practice because the healing process takes time and effort from our side. Even today, I often feel that I shouldn’t wear a certain type of ensemble as it may highlight a certain part of my body and I try to camouflage it. It took time but I’ve been finally able to make peace with my body type. One must aspire for a healthy body and a peaceful state of mind,” said Sayantani.