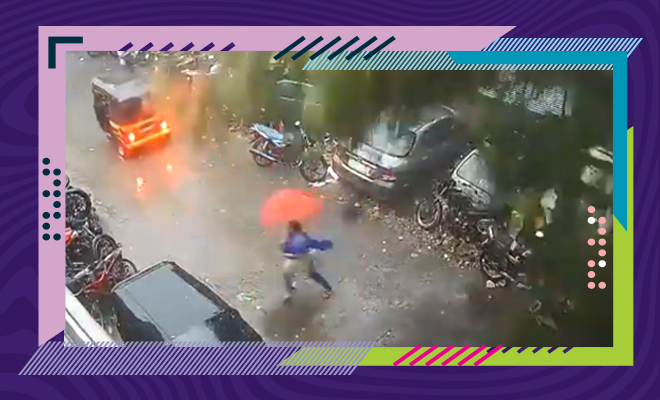 2020 was a roller coaster of a year.  What with the unprecedented pandemic due to the coronavirus, followed by a series of natural disasters from volcano eruptions to land slides to hurricanes. Which is why, when the year ended, we prayed that 2021 wouldn’t be the same. And so it wasn’t. Instead, it turned out to be a lot worse, at least for us Indians. With the second wave knocking us down, seems like we are back to where we were a year ago and that is moving on to the next stage of battling natural disasters.

As the cyclone Tauktae has struck in states Maharashtra, Goa and Gujarat, the danger looming over the heads of people has increased. Up until yesterday, Cyclone Tauktae had reported to have taken 4 lives in Gujarat with the weather and circumstances not getting any better.

And one such person caught in the aftermath of the cyclone was a woman in Maharashtra who had a miraculous escape from being crushed under a tree that suddenly got uprooted in Mumbai, nearly killing her. The video of the escape has already gone viral, giving us all goosebumps of just how close the incident was.

#WATCH | Mumbai: A woman had a narrow escape when she managed to move away from the spot just in time as a tree uprooted and fell there. (17.05.2021)

Also Read : #Culture: Kareena Kapoor Lends Support To A Fashion Fundraiser To Help Artisans Hit By Cyclone Amphan And Covid-19 Lockdown. She Is A (Responsible) Fashionista!

Captured on 17th May, the merely 8 second long video clip was enough to stop us in our tracks and had us holding our breath as we saw the woman escaping just in time.

In the video, you can see the woman walking down the street with an umbrella in her hand and its obvious the cyclone was still wreaking havoc at this point, and in just a second, you can see the tree come crashing down. Call it an instinct or just lightning fast reflexes, the woman, as soon as she saw the tree getting uprooted, turned around and ran as fast as she could, dodging the branches and saving her life.

The CCTV footage has garnered well over 30 thousand views in just one day after it was posted on Twitter by the news agency ANI while reporting on the cyclone. As far as the cyclone and the destruction happening in its wake is considered, winds with a speed upto 100 km/hr, enough to uproot large trees, disrupt traffic and force shut the Mumbai airport, show just how dangerous they really are.

Also Read : A Video Of This Grandmother Casually Bowling A Perfect Strike In A Saree Has Gone Viral