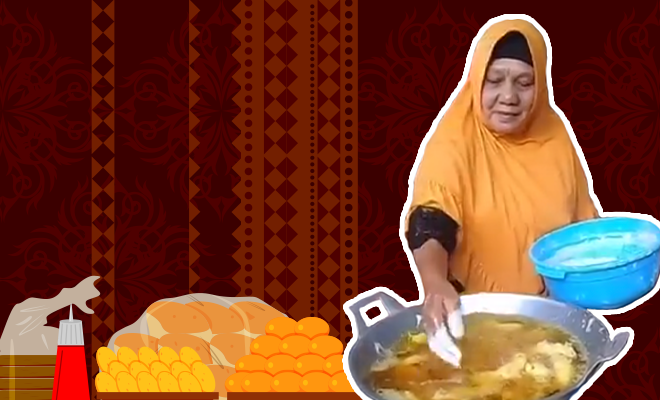 A Viral Video On Social Media Shows A Woman Dipping Her Hand In Hot Oil To Fry Food. We Are Shook

Before this coronavirus-induced lockdown hit us in the face, I wasn’t much of a cook. I could make a few things here and there but nothing major. All that changed when my mother and I decided to make one new dish every weekend. It was fun for a while and I learned a lot. I think my mother was just proud I didn’t burn the house down. I came pretty close though when I tried to make cupcakes. Anyway, no matter how much time I spend in the kitchen though, there is something I am terrified of- deep-frying. Just being around that boiling hot oil scares me to pieces. However, it’s clearly not that big of an issue for this woman whose video shows her frying food with her hands. I don’t know how she does it but I would guess magic powers or well, photoshop. Can’t be sure.

Just to warn you’ll, this viral video gave me a mini anxiety attack so please brace yourselves. In the clip, the woman is frying her food by dipping her hands in boiling oil. We aren’t making this up. The video was first shared by Twitter account, First We Feast, and captioned, “She said tongs are for losers”. Which, if you think about it is the perfect caption for this video.

She said tongs are for losers 😭😭😭 pic.twitter.com/QF4IaFiMd7

In the 13-second video, an elderly woman is seen frying food. Instead of using tongs or a spatula, the woman is using her fingers to move the food around in the oil. At one point, she was seen smiling and talking to the bystanders. She even picks up some hot oil from the pan to show people that she isn’t getting burned. And she does it so casually it’s like she is playing with the oil like it’s just plain old water. This woman must be fearless.

This woman is defying science. How can someone put their hands in boiling oil and not get burned? A few drops of hot oil can leave blisters on your skin. So, how is she doing this? It’s baffling. She should really try out for India’s Got Talent, they will love her on that show. And it seems like netizens also share my sentiment. This video has been watched over 16k times.

Tweeple are calling her a badass and saying that her palms are made of steel. Though some are saying that the thick batter coating her hands is protecting her from the oil. Guess we will never know how she is doing it.

Also Read: This 23-Year-Old Woman Earns A Rs 43,000 A Week By Selling Pictures Of Her Feet On Social Media. It’s Making Us Consider Changing Professions.

Check out some of the comments:

you don't need tongs when you have iron palm https://t.co/5bJPcWIiD4

My wife pointed out the thick batter is protecting her hands. Badass.

If anyone is “built different” on this earth, it’s this woman. what a specimen. https://t.co/gTFVUOHpea

Avatar : The Legend of Oil Bender

In these last few months, we have seen a lot of bizarre things on social media but this particular video is next level. I think it’s mind-blowing how my mother puts salt in the food without measuring it so you can imagine just how taken aback I am with this woman. Seriously, what’s her secret?

However, since this video is undated we don’t know who or even where it was taken. It could be an old video that has just emerged now. Or, it could be completely photoshopped, who knows? I would be very disappointed if that were true though.

These are some next level cooking skills.