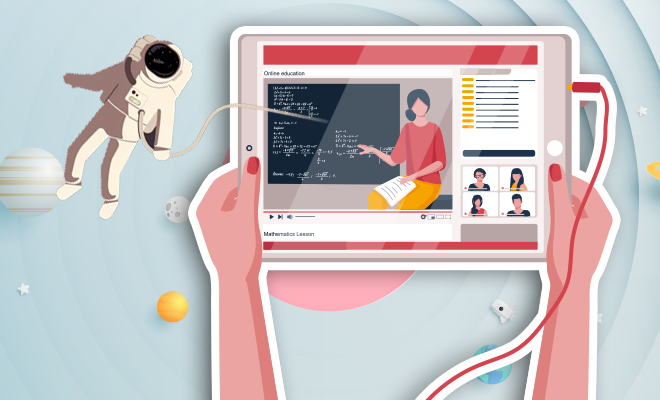 A Teacher In Kerala Is Bringing Augmented Reality To Online Classes To Make Them More Fun And Interactive.

When I think back to the time I was still in school, getting up early every morning and showing up to only sit and cram the next chapter in the syllabus, I would often wonder if there could have been a better and more interactive way for the teachers to teach us these theorems and science. Yes, from time to time, we’d be shown presentations, asked to prepare skits and even be taken on excursions, but the long-text based format often had us raising our hands not to ask questions, but to cover up our yawns. Something that the quarantined students need not worry about in Kerala, as one particular school has added quite a new dimension to studies during lockdown.

Taking things up a notch and making the basic kindergarten learning for students more interactive and fun through the screens, we have Shyam Vengalloor, a social science teacher at the AEM AUP School who has recently introduced augmented reality into online classes for kids.

As futuristic and innovative as it sounds, using this state-of-the-art technology, Shyam says he aspires to impart a better education for his students. And we think, with the kind of efforts he’s been making, that hope is sure to turn into reality, and how. Talking about it, Vengalloor said, “It took around two months to get it done. The online lessons were otherwise dull and needed more effort.” And we’d agree, considering staring into a screen, sometimes with a lag that too, can only engage you so much.

Also Read : From Lewd Messages To Parents Video Calling Them, Teachers Are Facing Abuse While Conducting Online Classes. Is This What We’ve Come To?

With this technology in place, students can now spot giant globes, life-like animals and much more on the screen, that not only attracts their attention, but also helps them focus better, while giving them something to look forward to everyday in class.

After seeing how successful his efforts into making learning fun had been, several other schools and teachers have been going up to Shyam to seek his help for a similar technology. Shyam shared how it was by using green screen, Gif (graphics interchange format) images and several apps, that he was able to pull the augmented reality off, with audio and sensory enhancements. Guess, this is the very spirit to disseminate knowledge in an interesting manner is the reason the profession is called noble.

Also Read : 39-Year-Old Linza RJ Went From Being A Cleaner To An English Teacher At The Same School. Her Story Has Us Inspired