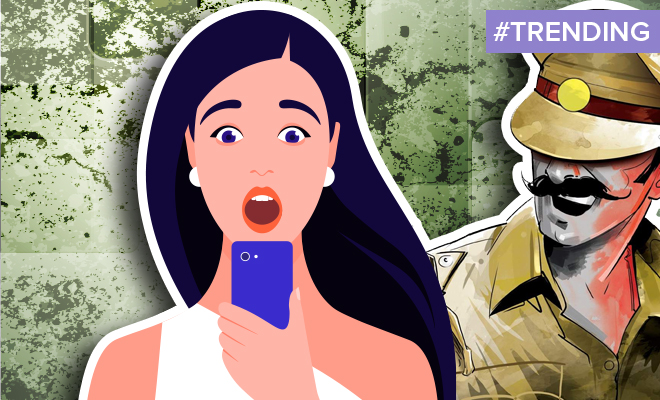 A Cop Got Suspended For Harassing A Woman By Sending Her Obscene Videos And Texts. Yet Another Officer Misusing His Position

Over the last few months, I have read about countless incidents where a woman has been wronged or mistreated in some way or another. From catcalling to gruesome rapes, women are just not safe anywhere. But that’s is not news to you, is it? I mean, how can it be since there is at least one story trending every week about a woman being raped, thrashed or murdered.

When I come across incidents like these, I always wonder how the cops go about their investigation. Do they check all the evidence and the fingerprints or do they just take bribes and sweep the matter under the rug? I would like to believe most police officers are doing their job of protecting us. However, I am not oblivious to the fact that corruption haunts our justice system.

In fact, there have been cases where the cops themselves turned into predators. The wolf hiding in sheep’s clothing. Just last month, there was a case where a cop was arrested for raping a 13-year-old girl. And before that, there was a case where a cop masturbated at a woman who had approached him to file a complaint. So yeah, not all cops are here to protect us. Not all cops can be trusted. And maybe in an ideal world, they would be the guardians who work by the book to ensure safety and harmony. But in real life, several officers are on the sinister side of their authority.

#UttarPradesh: A sub-inspector allegedly sent inappropriate text messages and videos to a woman who had approached the police as she was being harassed for dowry. @Uppolice https://t.co/zIga889jBs

Having said that, a new incident of police harassment has come to light. This incident took place in Bulandshahr, Uttar Pradesh. An inspector has been suspended, on Monday, for sending obscene videos and messages to a woman on WhatsApp.

The woman had gone to the Sikandrabad police station to file a complaint against her in-laws for mistreatment after they had a dispute over dowry. Once she filed the complaint, the investigation was handed over to the accused inspector, Ajay Prakash Singh.

During the investigation, the policeman asked the woman for her number. He then started harassing her by sending vile and obscene messages and videos.

The woman then approached Bulandshahr’s SSP Santosh Kumar Singh to lodge a complaint against Ajay. After he verified the claims, Ajay was suspended from duty and a departmental probe was started.

The SSP said, “The accused policeman was suspended and another officer was deputed to probe into the harassment case.”

As great as the police’s response time was, is a mere suspension really enough? Clearly, a lot of police officers think they can harass, stalk and mistreat women. And suspending them is not a viable solution. The punishment does not fit the crime.

Also Read: Kanpur Cop Refused To File 16-Year-Old Girl’s Molestation Complaint Unless She Danced For Him. This Is Sickening

Police officers are supposed to be the people women turn to when they have been wronged or are feeling unsafe. This is very shameful and disgusting. You know, it’s no wonder that a lot of women choose not to report their grievances. Cops aren’t the most sensitive people but this is outright bullshit. If the police themselves are doing the harassing, who is out there catching the bad guys?

Stronger action needs to be taken against this police officer and every other police officer who thinks it’s okay to misbehave with a woman just because he is in a place of power.

Odisha Police Arrested The Cop Who Raped A 13-Year-Old Girl Repeatedly. They Have Issued A Public Apology But It’s Not Nearly Enough