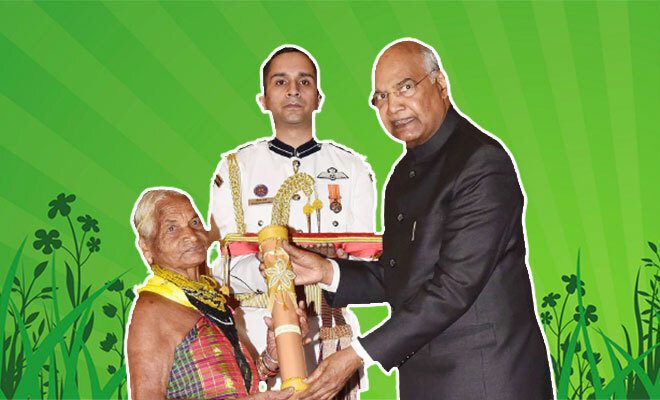 With the popularity of social media and mainstream media, it is very easy to get distracted and focus one’s attention on the dazzling and edited pictures and videos of mainstream celebrities or even social media stars. However, in the process, it is easy to forget about or even ignore the members of our society who deserve the same or dare I say, more attention and support compared to what we give these celebs. It is great that awards like the Padma Shri, the 4th highest civilian award, are there to show recognition to such unsung heroes who put the country and the citizens’ needs before their own. One such person is Tulsi Gowda, a 72-year-old tribal woman who has dedicated her life to the preservation of the environment.

President Kovind presents Padma Shri to Smt Tulsi Gowda for Social Work. She is an environmentalist from Karnataka who has planted more than 30,000 saplings and has been involved in environmental conservation activities for the past six decades. pic.twitter.com/uWZWPld6MV

Tulsi Gowda belongs to the Halakki indigenous tribe in Karnataka, from a poor family without any formal education. Despite these challenges, she is popularly known as the ‘Encyclopedia of the Forest.’ This is owing to Gowda’s vast knowledge about the different species of plants and herbs. Tulsi has always been passionate about nature and has nurtured and planted trees since she was 12. She eventually joined the Forest Department as a temporary volunteer where she was appreciated for her dedication and hard work towards to preservation of the environment. Tulsi was eventually offered a permanent position at the department.

Also Read: Called The ‘Encyclopedia Of The Forest’, Tulsi Gowda Wins A Padma Shri For Her Contribution Towards The Environment. Her Story Is Inspiring

She is an environmentalist from Karnataka who has planted more than 30,000 saplings and has been involved in environmental conservation activities for the past six decades. pic.twitter.com/pgwXMYx8ZD

Tulsi Gowda was also appreciated for her services and achievements by netizens on Twitter. Some of the tweets talking about her were,

Tulsi Gowda, true pride of mother India 🌿
In the last 6 decades, she has planted more than 30,000 saplings and has been involved in environmental conservation.
Our Govt has recognized a true gem, congratulations #TulsiGowda, on your Padma Shri award! #PeoplesPadma @MahaEnvCC pic.twitter.com/jg62WfPSYk

Heartfelt congratulations.
Crowned with #PadmaAwards2021 to noted Environmentist #TulsiGowda , Her Achievement is unforgettable example for present and next generation ,especially at the time of #Globalwarming period. pic.twitter.com/HwoY1ZsGFx

It is really redeeming to see someone’s life’s work being appreciated like this. The amount of support and love that Tulsi has received for her services are completely justified and she deserves nothing short of that. She had no intention of getting attention for what she did and did it selflessly out of her own passion for the environment. People like her deserve all this and more!

Priyanka Chopra Apologises To Disappointed Fans For ‘The Activist’, Says The Show’s New Format Will Be Better